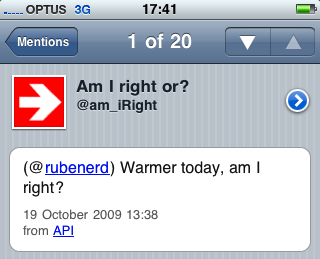 There's a new grey area for Twitter accounts. Where as before I'd either see a real person/organisation/whatnot or a spam bot when clearing out my followers list, there are an increasing number of bots that's sole purpose is simply to look for keywords tweeted by people, and either repost them or automatically respond. Both have the consequence of sending me a tweet because they've used my @rubenerd handle, which when done enough times during the course of a day gets old fast.

A retweet from a real person is fantastic, it means people who otherwise wouldn't be following me can see what I'm posting, and it shows people are interested in what I'm saying. When a bot retweets me merely because they're trawling through current tweets searching for keywords though, its somewhat less fantastic. Grilled cheese sandwiches have cheese in them.

I positively loathe these arbitrary lists of the "types of Twitter users" that people seem overly compelled to produce with dull regularlity, but in this case I think it makes sense because we're dealing with a specific phenomena. So far these are the kinds of keywords bots I can identify:

Keyword bots as a service
These include bots that search for specific topics such as a location or a company and retweet them, so people interested in a topic can subscribe and check out who’s discussing it. While a great idea in theory, the same results can be achieved by using a dedicated search in clients such as TweetDeck that don’t also annoyingly ping the people who’s tweets have been reposted.
Keyword bots as marketing
This is spam, plain and simple. Every time I talk about web hosting to another Twitter user, I get a flurry of spam messages from bots that have detected my use of the phrase "web host". These result in a block and a report to @spam.
Keywords bots for… nothing!
These are retweets generated by bots based on the most arbitrary, pointless criteria. This afternoon I’ve been retweeted and had messages sent to me because bots searching for the phrases "mum", "how about that?", "isn’t it" and "wow" picked up tweets of mine. I guess these could be fun for a few people, but as the number of these increase and drown out messages from people who I care about, I’m getting closer to blocking them and reporting them to @spam too.

If you're a Twitter-er-er-er-er, what do you think of these Twitter bot whatsits? Are they harmless and I'm overreacting, or do they annoy you too?