Stilgherrian podcasted and rode the Caltrain for us back in Australia in 2014, so we didn’t have to. Exactly four years and one day later, Clara and I were wandering around the Caltrain station in San Francisco, and made many overlapping observations. 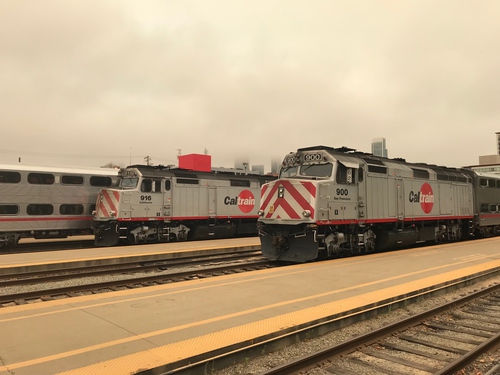 When I first arrived here, my boss laughed that for its ultra modern global reputation, Silicon Valley runs on diesel. And aside from the so-called Baby Bullets, the locomotives are the boxy shaped ones more commonly seen pulling freight trains.

Efforts to electrify the system have taken even longer than the long-suffering Gawler line in Adelaide I used to take when I studied at UniSA; Stil knows what I’m taking about! So in the meantime, you can peek across the fence and see several of these lococs docked to the huge, double-decked carriages.

Which leads us to the colour. We’ve had spectacular weather since we started working here, but this morning we awoke to the sight of a surreal, orange-tinted sky and fog. It felt like Mars wandering outside the railyard. 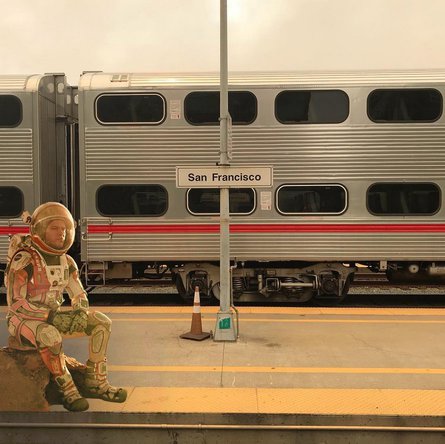 This lead @vmisev to render a delightful modification to this image. As Mayor Quimby once commented, that’s a quality side!

You can get it on Train Simulator

A friend of mine commented that Train Simulator was the most “gifted” game when he worked at EB Games, presumaly because people were too embarrased to admit they play it. I used to count myself among them, now I don’t give an accute flying toss!

If grown men can watch other grown men tackle each other in tiny satin shorts and call it manly rugged rugby or AGL or whatever, I can operate a virtual train and make grunting noises as I attempt to navigate it up steep terrain and other hazards.

I’m not sure how tosses fly, but there you have it. 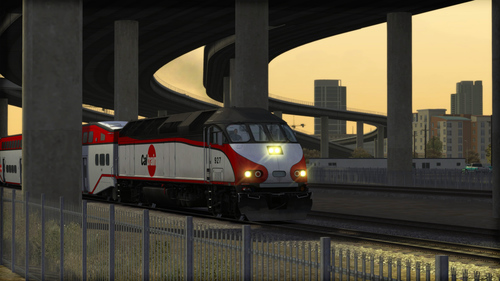 I just checked, the game has a San Francisco to San Jose route, though it has mixed reviews. I may still need to get it; if only so I can play it with that same orange sky when I’m back in Sydney in a few weeks, like a gentleman.

And there ends my meandering post about Caltrain. No podcasting from me about it, because again, Stilgherrian did already from that endless plain of lowrise office campuses and desolate freeways.