Everyone’s done those hypothetical about what one would do with a million dollars. I feel its somewhat less exciting for my generation, given that amount would barely cover an apartment in Singapore or Sydney. But if we took absolute numbers out, and assumed selfishness in lieu of altruism, what would you buy?

There are far-out ideas like paying the European Space Agency to build you a rocket to Neptune, or genetic engineers to make you immortal. I also find those less exciting, maybe because they don’t seem obtainable somehow. Maybe I lack sufficient imagination.

Until this most recent news story broke, my fantasy had been to buy the Queen Mary from Long Beach, and Queen Elizabeth II from those Dubai property developers, and berth them together in a maritime museum. Maybe even get the rusting hulk of the SS United States restored and shipped from Philadelphia. 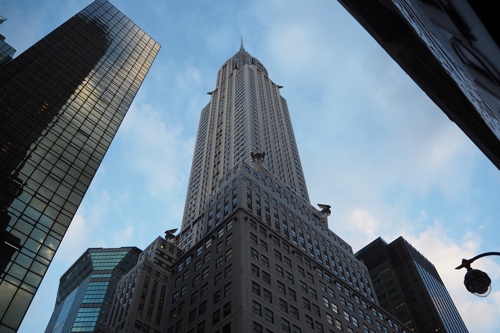 But the idea of owning my favourite building would be simply too irresistible a chance to pass up. Standing in the lobby of the Chrysler Building two years ago was one of the highlights of my life, even if the security guards quickly ushered us away. The photo above was taken shortly after we saw the building for the first time; because of course we went back a couple more times.

I’d turn the top floor into a free observation deck, the penultimate floor into a chill cafe, another into an apartment for Clara and I, and the entire pedestal section of the building into an art deco museum.