My Twitter followers outside Australia are likely bored to tears about my bushfire comments, and I’ve been tempted to blog daily about it as well. The situation is equal parts terrifying and surreal. 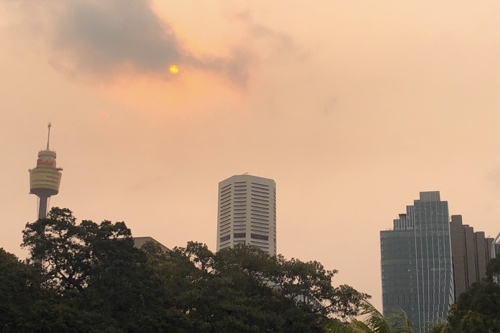 Yesterday and colleage of mine and I went out to Parramatta in Sydney’s west for a client meeting. The view outside the office window was a deep orange, and the heat was the most intense I’d felt since I left the airport in Dubai as a kid. The view above is of the Domain from earlier this month, but it was an even bolder colour than that.

But the biggest shock came when we were getting the train back. It was an express that started its trip in the Blue Mountains, and the air conditioning on board smelled more like smoke than outside. I thought of what horrid conditions it must have travelled to get to where it was, and how relieved the crew must have felt going the other direction towards the coast. As we got closer to Sydney, we couldn’t believe how quickly the sky changed from a rusty brown to a bleak grey.

Which leads me to a LINE message my dad sent to us yesterday:

I just came back from the north (bris n byron) its horrific - not a few burnt trees but 100s of kms of something that looks more like a scene from an apocalypse movie. At one point had to turn back bacause roads closed - not because of a burning fire but the aftermath- telegraph poles, bridges, fences, safety barriers, road signs all gone and bits of dead trees all over the road I’ve grown up with bush fires since i was a little kid but the intensity of this is on another scale

And on why people vote for political parties that keep turning a blind eye to the problem, or worse:

unfortunately thats very common with the “average joe” n why nothing is happening. And my feeling is the millions of “new Australians” (having been one !) want to fit in a keep a low profile so that they just go along with everything the pollies say

My dad’s side of the family emigrated from Germany after the war to Australia. I hadn’t even considered this angle.