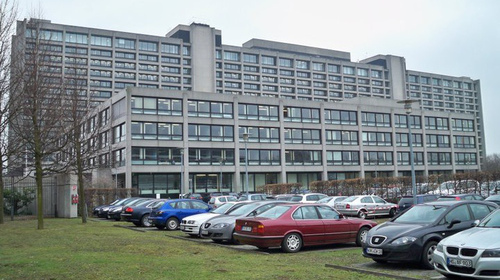 An interesting (or at least, I thought it was interesting!) report from the Guardian:

The Bundesbank plans to bring back to Germany some of its 1,500 tons of gold stored in the vaults of the Federal Reserve in New York, and the 450 tons stashed with the Bank of France in Paris, reported the German newspaper Handelsblatt.

Economics aside, why was it all there?

Most of Germany’s gold reserves have been stored overseas since the cold war amid fears of a Soviet invasion.

While a fascinating idea, the official press release from the Bundesbank website makes no mention of the cold war or the Soviet Union as a reason.

The image above is of the Deutsche Bundesbank building in Frankfurt, by MBisanz on Wikimedia Commons. A classic Brutalist design. The building in the photo, not the photographer. You’re weird. KRQRG636ED2W