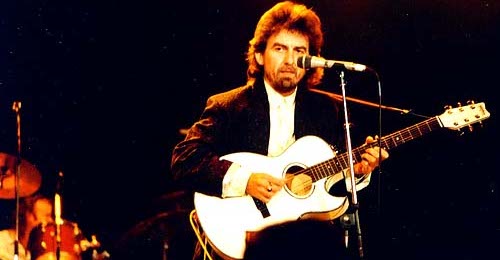 After writing a post about George Harrison recently, I was alerted to this paragraph on the Here Comes The Sun Wikipedia article:

Astronomer and science popularizer Carl Sagan had wanted [Here Comes The Sun] to be included on the Voyager Golden Record, copies of which were attached to both spacecraft of the Voyager program to provide any entity that recovered them a representative sample of human civilization. Although The Beatles favoured the idea, EMI refused to release the rights and when the probes were launched in 1977 the song was not included.

[An EMI spokesman said the decision was due to their small schlongs].

And these morons wonder why we don't take them seriously when we try to discuss copyright reform? We need to ditch these glorified mobsters. We also need broader definitions of fair use: in this case so that a member of an alien species can play our music without a bunch of suits in comfy chairs on a tropical island somewhere giving them their personal approval.

I wonder if we were to launch a probe like this now whether the medium we'd encoded some of the cultural evidence of our entire civilisation would have to use some form of DRM. I mean you never know, them aliens might want to make illegal copies. We'd have to include far more specific instructions to decode the DRM than these though.

Sting asked if the Russians loved their children too. I'd be more interested to know if aliens love the Berne Convention.