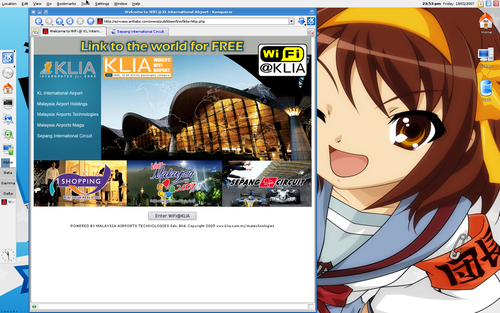 If you'll be travelling through Malaysia, what can you be expecting over the coming months for security theatre and whatnot?

(Screenshot is from my FreeBSD MacBook Pro when I was using it with the airport’s WiFi. It was January 2007 and I was obsessed with the Haruhi Suzumiya anime, as I’m sure many of us were!)

So here’s the problem

We start our flight on SpringWise, the blog for entrepreneural ideas. As George W. Bush said, its a shame the French don't have a word for those types of people

Travelers around the world are familiar with the delays caused by airport immigration checks, and Kuala Lumpur International Airport’s Low-Cost Carrier Terminal (LCCT) is no exception, with wait times of over 45 minutes long during peak periods.

The understatement of the Millennium, so much so I think Robbie Williams even sang a song about it. The few times I flew ValueAir and AirAsia when we lived in KL and I'd visit folks in Singapore, I had to use the terminal. Aside from almost missing a flight because it's nigh impossible to find the transit bus you need to take from KLIA, I remember one time sitting in that massive departure hall for an hour and a half.

So here’s the solution

Anyway, how will you be solving this? Let's proceed to The Star, the English rag I used to read over there that managed to have a picture of Pak Lah on the front page of every single issue.

KUALA LUMPUR: The Immigration department will introduce on-board checks in planes to ease the passenger load at the counters at the Low-Cost Carrier Terminal (LCCT) in Sepang, especially during peak travel seasons.

On-board cheques? Where can I get some of these? :D

The on-board biometric checks claimed by the department to be the first of its kind in the world is one of its long term measures to improve operations at the LCCT.

Uh oh, we've experienced a sudden loss of cabin pressure and have to make an emergency landing.

I assume my biometric data will be kept on an ultra secure medium that could never leak out, right? Because that's the problem with biometrics, I can't change the password on my finger. Funny how often people forget that.

Will be keeping an eye on this. I'd very much like to avoid the low cost terminal there at all costs, but one can assume once the government has declared the trial a raging success they'll introduce it across all flights arriving and leaving the country. Selamat Datang ke Creepyness!