Just before Clara and I went up to Kuala Lumpur to explore Plaza Imbi—among other places!—we made one final trip to Sim Lim Square. I heard the rumors that the complex is being on block sold, so we took the chance to have a goodbye wander and take pictures. I’m sensing a trend here.

As I said on The Instagrams, I couldn’t tell you how much of my childhood was spent in this building when I was growing up here. But it would have easily been a few hours a week, if not more. As late as 2007 here I was blogging about going there.

Along with the late former Funan Centre, SLS was the place everyone in Singapore went to get computers and electronics. Before building PCs became the exclusive purview of gamers and enthusiasts; when it made financial sense to build your own machine rather than buy complete systems or expensive laptops; SLS was full of parts stores. In its heyday in the 1990s and early 2000s, I felt as though I was on the floor of the New York Stock exchange with the shouting, crowds, and laser-printed price lists.

In its less-reputable days, one could also find pirate software and movie stalls among the legitimate stores. I vividly remember on more than one occasion as a child wandering the centre with my dad, and hearing loud shouts about police coming. I’m not sure if they were tipped off, or they just had lookouts, but no sooner as they could shuffle all their customers out, the whole complex was ringing with the clattering of metal shutters being rolled down and locked. I was a relatively sheltered child, so at the time it startled me no end!

I owe a lot to Sim Lim Square for my personal development and career. I got my first and only IT related retail job within its walls. I built my second, third, and fourth computer there. The machine I first installed a BSD operating system on came from there. At one point I was building computers for friends, then it expanded into me doing it for money for other expat parents. And whereas I hung out at Funan Center and bought most of the peripherals and monitors there, SLS was where everything else came from; to the point where several of the stall owners knew my name and could often predict what I was coming for.

But the writing was on the wall even by the time I came to Singapore in 2014. Cybermind and Skylet were long gone, along with the second hand computer store in one of the back corridors on level three where I used to talk to the auntie for hours. Some of the camera stores were still there, but had shrunk their footprints. At least Video-Pro was still around! 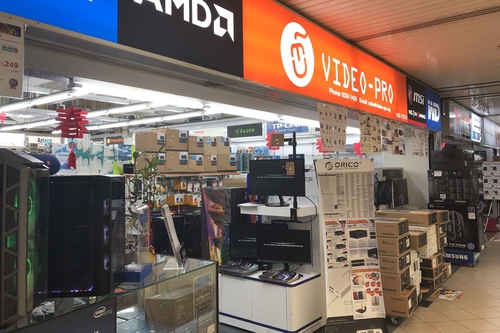 What was heartening was seeing a larger crowd and more open stores than there were last time; fewer people than the early 2000s, but a respectable crowd. I managed to find a replacement retractable Ethernet cable for my daily carry kit, and a few other bits and pieces. This is what SLS was great for; back in Australia I can buy the same parts online and wait two weeks for shipping, but it’s all right there. And I’ll miss that.

Maybe the block won’t be sold, and SLS will keep being the place people go to for parts in the future. Maybe it’ll have its soul gutted and replaced with superficial, authentically-agile space as what happened with Funan. But I wouldn’t be surprised to see a new building in its place next time we come up, complete with all the generic, cookie cutter stores that are everywhere else. But it’ll be hip, trendy, and modern!

I suppose we’ll always have Den Den Town and Akihabara.