Last week a colleague and I were flying around Australia to speak at the WatchGuard roadshows. Our last day was in Perth, on Australia’s west coast.

Perth is an interesting place. Technically you’re closer to the Indonesian capital Jakarta than you are to Canberra there. If you look at a map of Australia, almost all the major cities are on the other side of the continent, so you really feel as though you’re in the middle of nowhere.

(A West Australian client told us the Brisbane to Perth trip is the longest non-stop domestic flight in the world. I don’t think that’s true; I’d assume Hawaii to the continental US would be longer, or between Moscow and Vladivostok. But it’s definitely a long flight!)

Perth holds special significance to Singaporeans because it’s relatively close, it shares the UTC+08:00 timezone, and has Australian universities which a decent number of international students attend. The other, perhaps less publicised reason, is the existence of the Dôme coffee chain everywhere in the state. 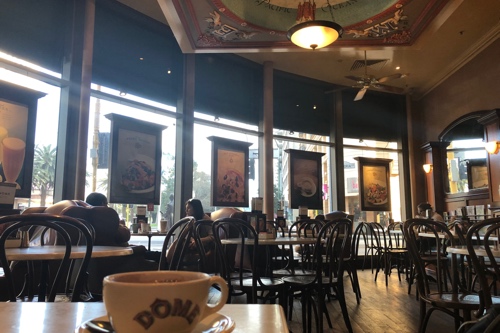 Before Starbucks or even Coffee Bean got a foothold in Singapore in the 1990s, Domes were everywhere. My personal favourite was the Olio Dôme in the late Park Mall. All their chains have a small dome in the ceiling, but that one was especially impressive.

So it was delightful to leave the hotel bleary-eyed the following Saturday and seeing a welcoming Dôme on the ground floor of a glass tower. Perth’s coffee drinkers likely consider it old-hat; I’m sure their hipsters whinge about them too. But it was a fun nostalgia trip, and the food was pretty good.