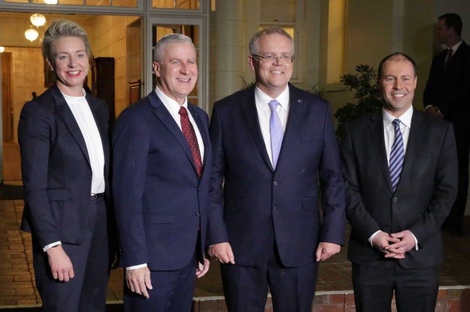 Yesterday was surreal. Australia’s prime minister, and my phone were both replaced, again. My iPhone 7+ couldn’t hold a charge anymore, and neither could Malcolm Turnbull with his own party.

Australia now has its seventh prime minister in a decade: Scott Morrison, second from the right in Nick Haggarty’s ABC photo. There’s a metaphor in that too.

For some international context

Most of my dear readers here are Singaporeans and Americans. Singapore uses the same parliamentary system, so imagine the PAP lost confidence in Lee Hsien Loong—if you could imagine that—and replaced him.

For Americans, prime ministers are akin to your American house majority leaders. They’re voted in behind closed doors by their party, and must be an elected representative. And unlike an executive president, they only stay in control at the discretion of their party.

(Our executive is the same as Canada’s, New Zealand’s, the UK’s, you may have heard of her. Though we all have a Governer General so poor ’Liz doesn’t need to fly around everywhere).

A prime minister resigning during their term, or having a successful spill motion against them by their party is uncommon—or at least used to be—but not unusual. Prime minister Cameron resigned in the UK after Brexit, as a recent example.

What’s bizarre about the Australian experiment is the rate with which they’re replaced. No sitting prime minister has served a full term since 2007, before members of their own party got antsy and deposed them:

Yesterday’s spill motion against Malcolm Turnbull was the second this week. On Tuesday, Peter Dutton challenged him but didn’t have the numbers. The second time, Malcolm Turnbull didn’t contest, with two other party members stepping up. It was slim pickings:

I’m glad we didn’t get Mr Dutton. But if I may quote a coworker and get blue for a second: for fuck’s sake.

Malcolm Turnbull was an interesting, if thoroughly disappointing leader. He was credited by his detractors for lurching their conservative party violently to the left, but centre-lefties like myself viewed him as a relatively spineless puppet for the wilder factions of his party; willing to capitulate and backtrack on what may have been his genuinely-held beliefs in a now-vain attempt to maintain power.

His legacy in my industry will be his wholesale destruction of the National Broadband Network. Before economies of scale could be realised, he replaced the single technology with a slower, and more expensive grab bag, dubbed the Multi-Technology Mix. Taxpayers will be footing the bill for this for decades; so much for the good economic managers.

In the aftermath of the first spill last week, a smiling Scott Morrison now-infamously held Malcolm Turnbull’s shoulder and proclaimed him to be “his leader.” To have someone from Turnbull’s camp become leader has the far-right pundits furious; this wasn’t the outcome they wanted!

Time to vote these muppets out next year.