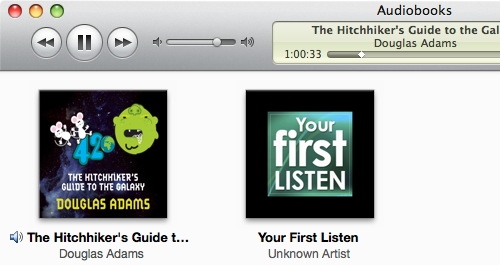 When a certain subset of students (alliteration is awesome) finish their exams for a semester they celebrate by intoxicating themselves with certain fermented beverages, while other more socially awkward loser types such as myself sit back and write a blog post about how they're investigating signing up for Audible.com, then like a child on Christmas Eve because they're too excited to wait they go ahead and register for it before they've finished said investigation.

As I said previously I've been listening to Leo Laporte rave on about Audible even before they started sponsoring his TWiTTY shows, so I figure having been a listener since 2005 I may as well see what all the fuss is about. As he aptly points out it's a natural progression from listening to podcasts (sorry Leo, netcasts!) to listening to audio books.

My choice of free book that I've been so thoroughly enjoying is perhaps a predictable one, though the absurdity of the first paragraph of this nonsensical post that perhaps could have been expressed by just saying "I got Audible!" illustrates the profound effect this tome has already started having on my mind. If for some inexplicable reason you can't see the image above, it's The Hitchhiker's Guide to the Galaxy by Douglas Adams. When I saw it was read by none other than Stephen Fry, I felt as though I had almost no say in the matter, and what say I did have was insignificant enough as to be drowned out by my squeal of delight upon discovering it.

If you'll indulge my Ducky from NCIS urges for a moment, this reminds me of my mum who literally filled bookshelves not with paperbacks but boxes of cassettes and later CDs. As I walked to the Boatdeck Café this evening for a cup of tea and some programming (I have wild Friday nights) I started listening and Stephen Fry is brilliant. It seems my mum's genes are alive and well :). 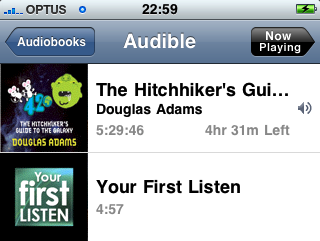 Arthur Dent’s house being knocked down

To be fair Audible has been fun but there are a couple of negatives. Perhaps the most annoying so far is the DRM which entailed me dragging the downloaded audio book file into iTunes and then "authorising" myself by logging it, bringing back dark memories of the early days of iTunes music purchasing when I realised I'd formatted my Mac too many times and "ran out" of authorisations because I hadn't taken the care to "unauthorise" each time. Still if it becomes bothersome I suppose I can burn an audio CD to back it up if in case something goes awry.

For a complete newbie like me it also wasn't obvious how to actually get the audiobook onto my iPhone after I'd downloaded it: there wasn't an Audiobook tab in the management screen for the device. Turns out you need to drag the book over manually as you would a song, but once it's on the iPhone it appears under the Audiobooks section, and it even tells you how many minutes you've got remaining and remembers where you left off.

The Audible website itself also isn't quite as seamless and easy to use as I would have liked initially, but exploring it for a few hours I've got used to it. For one I was disappointed a technology category wasn't listed in their main sidebar, but it turns out they do stock them and you can access them by clicking "More".

I'm liking Audible so far, I just worry that perhaps I signed up for the Gold account with the MacBreak code when I should have used the TWiT code and gone Platinum. I'm already a quarter of the way through my first book and it's supposed to last me a month :). My wishlist is already full of a ton of tech, science and history books and a few novels too.

Alas that's the problem with living so close to where I study, I don't have any commute time! I imagine it'll come in really handy though for when I'm cleaning or going through stacks of old emails. That reminds me, I haven't finished that blog post about email either. There just aren't enough hours in the day :).

If you're an Audible user, what books have you listened to recently? Any recommendations?