Labor is staying in power in the misleadingly-titled South Australia, but to my surprise when I woke up this morning I read Attorney General Michael Atkinson will be stepping down as… Attorney General. I could have phrased that better.

I'm hoping their reduced majority in the state parliament (are those words supposed to be capitalised… hey that was a pun!) will force the existing Labor folk to think long and hard about future appointments to key positions like this. It probably won't, but one can wish.

Atkinson's departure as AG isn't just a win for online civil liberties and computer gamers who now have a potential chance for being treated as adults in the R18AU debate, but for people who have had cancer painfully strike down someone so dear to them and didn't appreciate his cold and daft comparisons.

Don't let the door hit you on the way out sir. 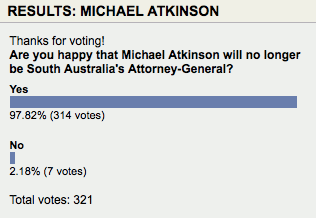