I'm not British, I don't live in the UK and the only radio station I've listened to in the Isles is Today FM in The Republic, but a ton of my English friends are up in arms about this latest move by the BBC to chop programming, so I'm doing my bit to help spread the word, however trivially insignificant it'll be in the grand scheme of things; wow this was a really long sentence.

From the self-doucumentingly (pretty sure that's not a word) titled Love6Music.com:

PROTEST — We’ve been asked to publicise the following but love6music is in no way responsible for it.

A fool knows the cost of everything and the value of nothing. The closure of 6Music is cultural vandalism. This Must Not Stand!

They have a petition you can sign, though I assume it's only for British folk. Don't let them make such a breathtaking mistake! The BBC I mean, not the petition people. 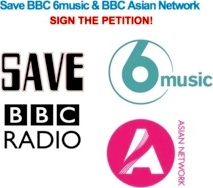