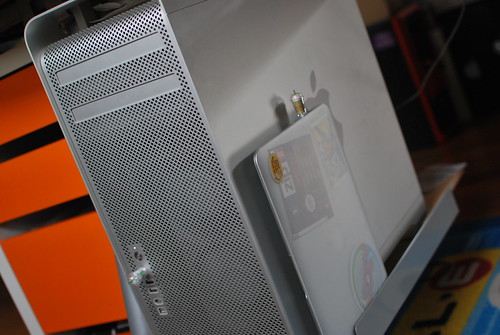 It’s as inevitable as the WiFi failing at UTS: I go to an anime club screening or to one of my classes, and someone jeers at me for having a Mac laptop and/or an iPhone. When I ask why, they say I’m a tool of advertising, and that I should be using an Android device with three words in its name, or something.

I use Apple products

There are practical and personal reasons why I use Apple devices. Having tried the rest, Apple have the best after sales support and student discounts, absolutely no competition. The iOS platform runs the best of breed software for my needs. OmniFocus is the best GTD organiser, NetBot and TweetBot are the best ADN and Twitter clients, Sleep Cycle is the best health application. If I gamed, I’m pretty sure they’d be on iOS too.

Then there are reasons I don’t use the competition. Android’s anaemic and patchy font offerings don’t please a typography nerd like me, and the platform is made by an advertising company whom I’ve increasingly lost trust in. I don’t like the UI direction Windows Phone and Windows 8 are taking. Tizen could be appealing, but it’s not mature enough yet. Blackberry has nice hardware, but not the software I need. My beloved Palm has all but died.

Reading Marco Arment’s Magazine article on the issue, I can relate to his experience. You shouldn’t ever read blog comments anyway, but if you unfortunately do by accident, the web is saturated with angry Android fans.

As I said in the intro, this isn’t just limited to the web, I get this iRL too. I have a hoodie with an Apple logo on it, and have even been accosted by Android users while waiting for a train, telling me with colourful language that I brainwash people and that their phones are better. The irony of their mob mentality was seemingly lost on them.

I’m not a sociologist, and am not aware what it is about the Android platform that breeds this vitriolic, knee jerk mindset in a larger subset of their users. I think it goes deeper than simple logical reasoning.

Whatever the case, it’s a sad state of affairs when people like @TypeDom have to specifically say they’re platform agnostic, then explain why. I should be able to just say I use Apple products without having to say I also run Linux and BSD to take some of the heat off. Having Tux on the lid of my MacBook Air seems to have helped a lot. Because yes, shock horror, I also use Linux. I must be pretty brainwashed by advertising.

Ultimately, people will use the devices that suit their needs and budget. For a large percentage of people, that’s an Apple device.