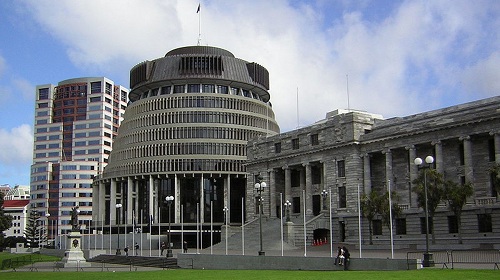 The draconian three strikes bill we were all hoping wouldn't pass… did. The full text of this bill can be found on the New Zealand Government's Legislation website. For the sake of brevity, I'll be commenting on Clarice Africa's FutureGov article. Pardon my rage!

Could the timing be any more blatant?

A bill that puts in place a three-notice regime to deter illegal file sharing has just been passed in Parliament.

And along with it a further erosion of New Zealand sovereignty to the United States and its media cartels.

The Copyright (Infringing File Sharing) Amendment Bill repeals Section 92A of the Copyright Act and replaces it with a new process to deal with online copyright infringements, said Commerce Minister Simon Power in an official statement.

In other words, a New Zealand law has been replaced with a faulty international one that would make Nicolas Sarkozy proud.

The bill includes a power for a district court to suspend an internet account for up to six months, in appropriate circumstances. However, this element of the legislation will not be brought into force unless the notice process and the remedies by the Copyright Tribunal are ineffective.

Fortunately we can take a small measure of comfort from the fact it defines the suspension in terms of an "internet account", so the alleged offender could just use internet somewhere else. While representing a substantial threat to civil liberties in New Zealand, ultimately its unenforceable and worthess.

The three-notice regime involves ISPs sending warning notices to their customers informing them they may have infringed copyright. The legislation also extends the jurisdiction of the Copyright Tribunal so it provides an efficient, low-cost process to hear illegal file-sharing claims. The tribunal will be able to make awards of up to $15,000 based on damage sustained by the copyright owner.

They "may" have infringed copyright. I suppose the presumption of innocence until proven guilty and due process aren't "efficient" nor "low cost".

Clarice Africa now quotes communications minister Steven Power, or Stanley Power, or whatever his name his:

"Online copyright infringement has been damaging for the creative industry, which has experienced significant declines in revenue as file sharing has become more prevalent.

Evidence of damage and causation please.

"This legislation will discourage illegal file sharing and provide more effective measures to help our creative industries enforce their copyright" he said.

Power added that the regime will be effective starting on the 1st of September 2011.

As well as the threat to New Zealand's sovereignty and the appalling trampling of the rights of our friends across the Tasman with funny accents, frankly the timing is disgusting as well. Using a national tragedy to distract people and push through such a draconian law is despicable. In the context of where the bill was past this quote from my grandfather seems partifucularly apt: if you played a roll in passing this bill, may the bees of a thousand hives nest in your armpits.

Photo of Bowen House, the Beehive and Parliament in Wellington by Midnighttonight on Wikimedia Commons.