I have a fair amount of MP3 and AAC music files; last checks in iTunes and Songbird claimed that I had a total of 49.80GB of music (not including videos in iTunes), most ripped as 192kb/s, though as of late I've started ripping at 320kb/s to future proof myself a bit. Still, the vast majoraty is ripped at 192kb/s which, while miles better quality than the more widespread and generic 128kb/s.

For the most part this works fine, but occasionaly when I'm at home and not limited to my iPod I pop in a Michael Franks CD and listen with some decent desktop speakers: the audio quality difference is really noticable.

As Peter Cook said "…well it's a long introduction for rather a short [story]!" ;). 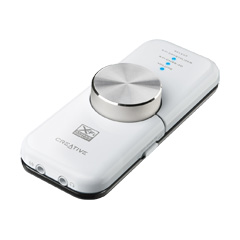 Anyway so with this whole Microsoft Zune thing going on, I thought I'd take a look at the Creative Zen (which I think is miles ahead of Microsoft and getting "closer" to the iPod with each release, and is from Singapore so it has to be good!), but what I found instead was even more interesting: the SG$139.00 Creative Xmod.

Apparently what this little device does from what I can tell from the site is it sits between your speakers and the audio out of your computer or music player and enriches the sound to regain some of the finer details of the music which would have been lost through lossy compression such as MP3 or AAC. Now I am a bit skeptical; anything that claims to improve audio quality from a low quality sourse sounds too much like turning lead into gold for me (if you get my alchemic drift!), but if it worked I would be impressed.

Has anyone had experience with this device? Sure it wouldn't be as good as a geniune CD or unscratched LP would be, but anything that makes existing compressed audio sound better would be a real plus for me.

And an even bigger question, would it make my voice sound better on the Rubenerd Show? :D