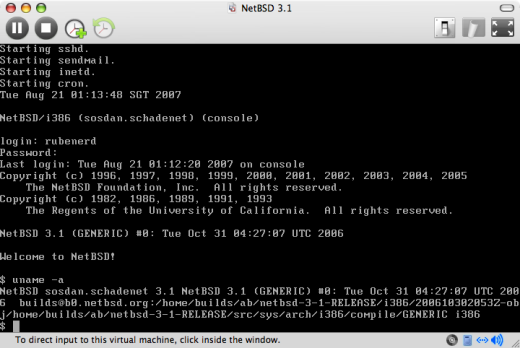 After a year or so of using FreeBSD I decided today to take another look at the operating system I learned UNIX on from the beginning: NetBSD (well actually it was Red Hat Linux 5, but I never left X!). I admit the way I learn things is to be focused on one specific programme, language or OS and hack away for a week rather than trying to be vague and learning many things at once not that well and not in much detail, and therefore not making much more than token advances in understanding. See how I slipped my critique about my university studies there? ;).

Reading back some of my previous posts I'm not entirely sure why I switched completely to FreeBSD back at the beginning of last year. I think part of the decision stemmed from VMware's official support of FreeBSD and the fact that more people were using it, so I figured it was a better boat to be floating in. I've been using a lot of boat analogies lately, I'm becoming a bit washed up. Get it? Aha. RATHOLE!

Having used NetBSD though for a few hours I've remembered what I love about it:

That said though, I'm not giving up on FreeBSD, I think there's definitely room for both. The default addition of portsnap and jail abilities (and coloured file listings!) are still very compelling, and the support for it in third party applications and drivers is certainly stronger. I think it will come down to a machine by machine choice for now.

I think it's safe to say I'm a *BSD enthusiast, I am a happy user of Mac OS X, I have a passing interest in GNU/Linux and Solaris, and I have a healthy distaste for Windows and System 7 ;).