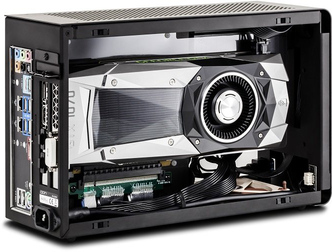 There’s another run of the DAN A4-SFX in silver and black; preorders close on the 4th of November. I was not paid for this, I’m just a fan.

If you haven’t seen one before, the A4-SFX was a Kickstarter project to make the world’s smallest computer case that can still take a full graphics card. The photo above shows its dual chamber design with a mini-ITX motherboard and a riser to connect it to the GPU. It performs surprisingly well in cooling benchmarks owing to the CPU and GPU fans pulling air directly through the perforated case sides.

You’re limited to a few SSDs, assuming one of them is an M.2 stick. You won’t fit desktop hard disks, optical drives, or any other PCI expansion; but then that’s why you’re buying it.

I’m looking to get one to scale down my exising game machine which has become a glorified, upgradable Steam console of late. It’d be a great fit for Clara’s and my studio apartment and tiny desks.