This was originally a draft on the Annexe, my Tumblr side blog. 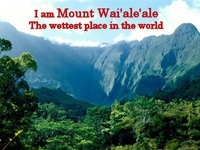 A stupendously rainy volcanic crater, you hold the dubious honour of being the wettest place on Earth, which may surprise some Scots. You receive 486 inches of precipitation a year, or forty and a half feet – the height of 6.89 typical Belgians. For comparison, that’s over ten times the rainfall of New York, twelve times that of Glasgow and five hundred times that of Timbuktu. If you took a cube of water a third of a mile along each edge, you would then have how much water falls on the mountain every year. You would also have a fine spot to keep whales and shrimp, assuming, of course, as you would have this water in a suitable place from which to drop it mericlessly on a soggy yet unsuspecting part of Kauai, that they were flying whales. And shrimp.