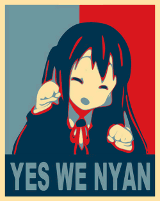 Today the Anime@UTS club had their Annual General Meeting, where we elected new members to the executive team, ate pizza and ice cream cake, watched Ace Attorney, and generally had a smashing time. It's the second AGM I've been a part of.

Behind closed doors, I was voted in as the club's new webmaster!

As the saying goes, I tend to mistrust any clubs that would have me as a member, but the execs, members and our illustrious president Alex have really created something special here, and I'm looking forward to contributing in a more meaningful way.

Thank you everyone for your vote of confidence ^_^