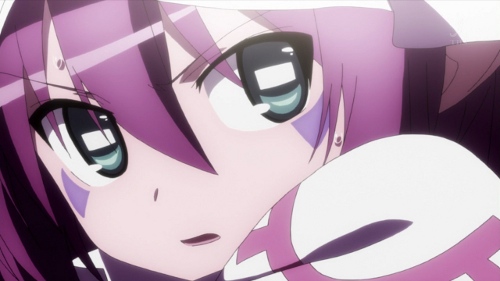 This show finally started exploring the idea behind dreams and how they affect us… which is why I started watching it in the first place! Yumekui Merry #09: "Disturbed Dreams" / "Yume Midarete".

After last episode which tended to lurch from adorable cuteness to more serious undertones, this episode consisted largely of the latter. Lots more detail, much less Merry eating a doughnut surrounded by angelic choirs of angels. Angelic chiors of angels, surprising though it may seem. 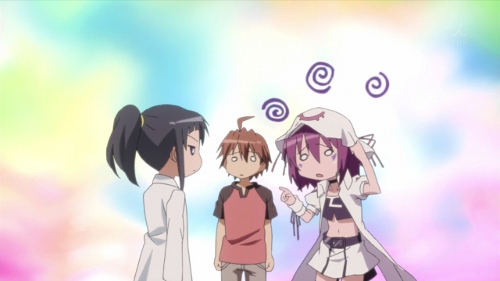 While being an unabashed fan of moeblob (and I really do mean that, people who claim the style is ruining the anime industry simply need not watch) I revel in shows that make me think, and while I must admit I was expecting Yumekui Merry to have a little more substance, this episode finally started to deliver it. Well, and that one scene above ;).

We pick up where we left of in the daydream state with Yui, her dream daemon Engi (complete with wings and ridiculously large bosoms), Merry, her dream colour-seeing sidekick Yumeji and the clownisly Commander Keen villin-esque Landsborough. That sounds like a brand of offroad vechile. 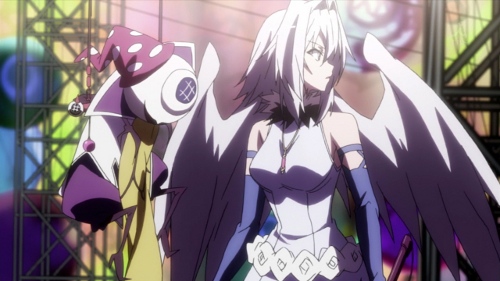 As Merry is about to deliver her spinning, highly coreographed kick arse blow that would make the likes of Sailor Moon jealous, he suddenly informs her of a reason not to. Engi attempts to take care of business, but is stopped by Yumeji once he himself understands the implications.

The pieces are all starting to come together. People's dreams are being intimitely researched, and armed with that information their hosts are being targeted and their bodies taken over for the next wave of mumas… and how its pulled off and who is behind it blew me away. I should have seen it from a mile away, and I'm kicking myself that they led me on for this long without putting the pieces together! 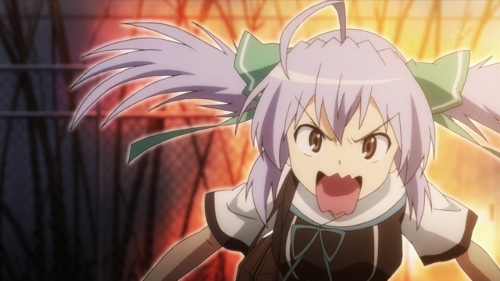 Yes, this is how long it took for me to get it Isana-san, shaddup! Coincidently this was also the point where I stopped reading the manga; albeit the anime and manga diverge significantly in places in terms of plot and introduced characters, but still, WOW. Kudos you schrewd devils ;).

A highly brief summary (well there goes my English degree, if I had one) but it leaves us to explore some of the interesting philosophical questions he raises that I was so looking forward to this anime delivering, just as I was excited to watch Inception! Dream words have always fascinated me! 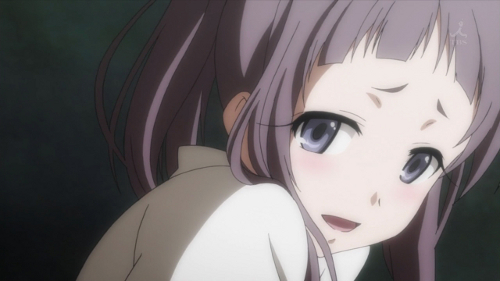 I'm quoting Ayako's fansubs here as I can't speak or understand Japanese ^^;. After confronting his foes, our offroad vechile brand-named dream daemon had this to say not about the perception humans have of their dreams, but of dreams on humans.

What attracts us to humans? The power to walk forward.

While dreams might seem perfectly random at times, they can only draw from our own previous experiences with people, places and events. Previous, right? So if there were dream daemons and they wanted to see the future rather than always living in someone's past (or a world influenced by past experiences) then they'd want to use humans as hosts to live in what they would perceive to be the future, right? Cool idea! 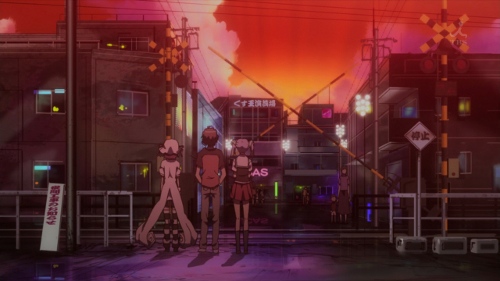 We leave on the thoughts of this otherwise evil character on what dreams do for people:

That's some pretty deep stuff right there, and I certainly attest to some of it. I would think it too easy to dismiss all our failings on our ability to dream, for one thing I doubt I could be a heavyweight champ by virtue of the fact I'm an anemic stick insect. At some point there are physical limitations that even our dreams cannot conquer. Or… can they? I suppose at this point we get into what constitutes a dream, and a limitation. 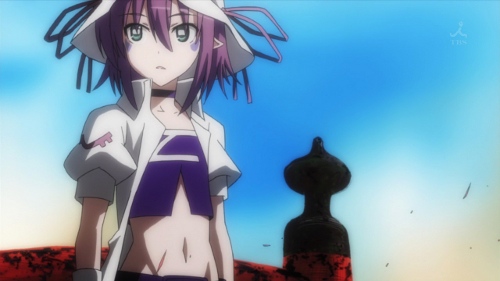 Needless to say, these quotes and the ideas behind the relationship between humans and dreems were pretty deep, but I think we have to go deeper. See what I did there?

My main criticism of this episode stemmed not from the plot, but by the sudden reversal of production values. In many of the scenes it seemed as though shortcuts were taken with drawing, and unless the characters were drawn right up close (I believe "closeup" is the cinematographic term, thank you Paul Simon) there was a tendancy to ignore even more basic detail. I've been told a similar phenomena occured with Gurren Lagann. Oh well, had the plot been crappy (and some say that it was, haters gonna hate) and the production values not so good, it would have been even worse!

That's not to say scenery wasn't still beautiful though. In anime, these are the shots that make me want to buy the Blu-ray discs when they become available. 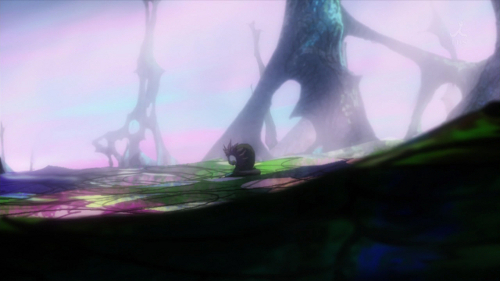