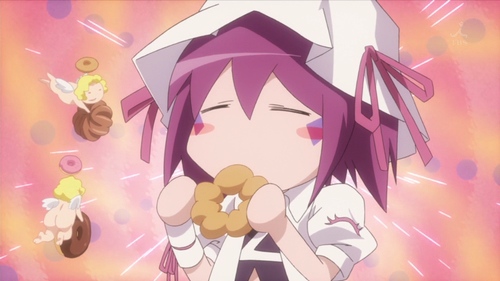 After a forced break from anime watching owing to a number of mitigating factors (aka: life), I'm back in the seat or zone or whatever it is cool people call it, and am ready to talk about such material again! Come to think of it I haven't been sleeping well at all lately, its probably Merry's fault.

The story is really getting more involved now, so much so that I felt like I needed to watch the previous episode again to refresh my memory. Turns out that was this series' obligatory beach episode though, so I didn't and just tried to make sense of what was going on. That's the great thing about manga, you can just go back a few pages after leaving it for a while! 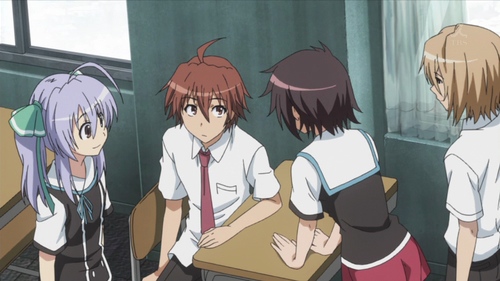 Leaving the realm of dreams for a while, Yumeji's cute housemate (for want of a better word!) Isana deals with more real world problems, specifically what she wants to do when she leaves high school. I can remember those career interviews with teachers, I know they have your best interests at heart but pressuring kids at that age always seemed kinda… weird? Needless to say after much fumbling and worrying, she admits she wants to draw. Designers ^_^.

In the meantime, the sprained ankle Yumeji picks up from their beach trip last episode has got worse, so naturally he walks with Merry to get it checked out by their local doctor. Wouldn't you want to get a lift or have someone come over if you had a sprained ankle? Would you be able to maintain such swagger in that condition? Perhaps the ability to see the colour of people's dreams also affords you some pretty gosh darn high pain tolerance. 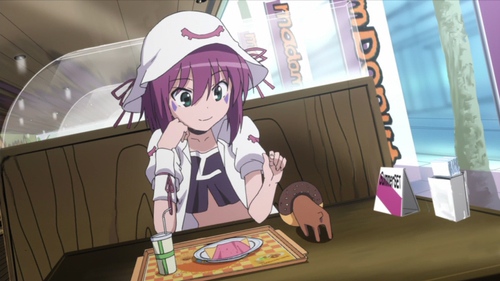 Speaking of tolerance, after lamenting the lack of doughnut related gags for a while, we finally get another one. Wait, what did that have to do with tolerance? Tolerating a lack of doughnutness? Never mind.

Merry was super adorable in the second episode when she tastes her first doughnut and sets the ball rolling (I was going to make a bad pun joke there, but decided to just roll with it) with this newfound obsession of hers, and in this episode while walking to the clinic they naturally walk past a doughnut shop. After swearing to walk alongside Yumeji to make sure he didn't injure himself further on the way there (presumably) he leaves her there to gorge (presumably) while he continued by himself. He's a good friend ;). 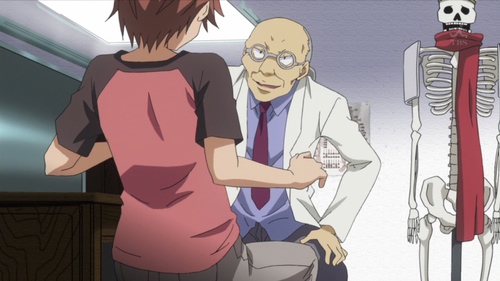 With a country of over 120 million people, coincidences in anime set in Japan sure are commonplace! In this case while getting his sprained ankle checked out by the doc, it turns out his granddaughter is Yui, the girl from the shopping centre he and Merry met back in episode 5. Of course! 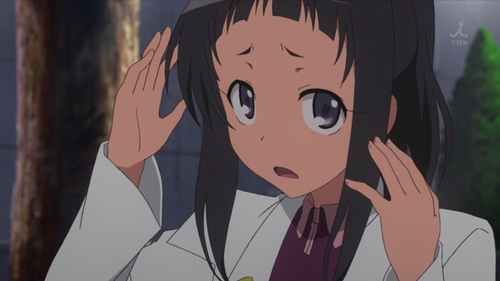 IT REALLY WAS THAT BAD! After ingesting some of her well meaning but awful tasting tea (straw!), Yui lets the Engi dream daemon use her as a host and explains what the heck has been going on. Startled, he drops and breaks a perfectly good Japanese tea cup, but makes up for it by having a chat with her on a stereotypically green field overlooking the city. Remembering he left Merry at the doughnut shop he rushes back to arrange a dialogue… I think!

What happens next reminded me of that episode of Star Trek Voyager when the minds of the senior officers are trapped in this mind control computer with clowns, darn it which episode was that again? When I saw it I was only a kid and had nightmares about it! Anyway this daydream was weird, right down to the array of geometric shapes across the floor and circus themed scaryness. Yes I'm sorry this stuff scares me, Cirque du Soleil has been the only circus so far that hasn't royally creeped me out! French Canadians. 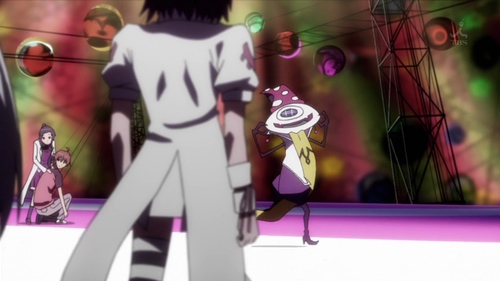 One of the patrons of the same doughnut shop who was working on one of those awesome maze placemats turns out to be a vessel for a daemon of his own who's single eye and weird build made him look like a villein from Commander Keen. His name is Landsborough, and its his scary circus world they're transported to, along with Yui who seems just as surprised to be there herself as Yumeji and Merry are. Argh circuses! Turns out he has a connection to Hercules, the dream entity not the graphics card or cheesy nineties television series based on the Greek God of the same name.

Soon the world will be filled with Mumas, leaving nobody to make doughnuts! 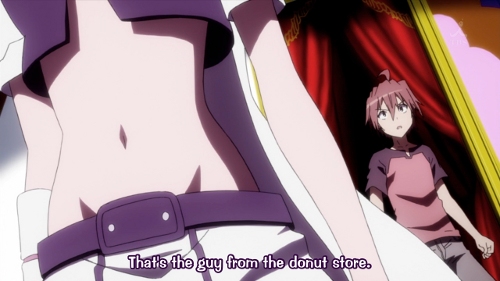 I'm sorry no, that's Merry! See what I did there?

Compared to previous episodes most of the fanservice this time around consisted of showing us Merry in awe of doughnuts, which I'll admit I thought was simply adorable. Insert holier-than-though rant about how scenes like this are killing the anime industry. There were also only a couple of the obligitory so-called "Merry Navel" shots which would have no doubt disappointed a large part of the fanbase. Oh well I guess every Star Trek Voyager needs its 7 of 9 :P

I didn't mention it in the notes for the previous episode, but I thought it highly amusing that the only episode where we didn't get shots like this was the beach episode where the other girls were wearing bikinis, the blokes were in their trunks, and she was wearing sukumizu… go figure! The studio making fun of a certain percentage of their viewers perhaps? But I digress! 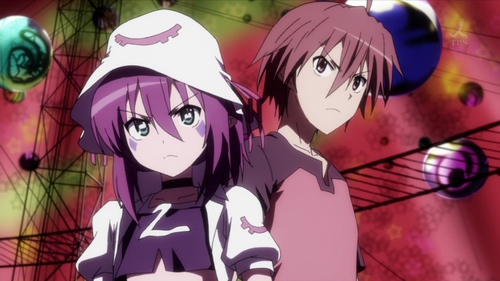 Now that I think of it, I'd wager there was almost as much Isana in this episode as Merry or Yumeji, which if I recall from the manga wasn't really the case. I love her hair, though I imagine that colour (while being most fetching) would be terribly difficult to maintain. 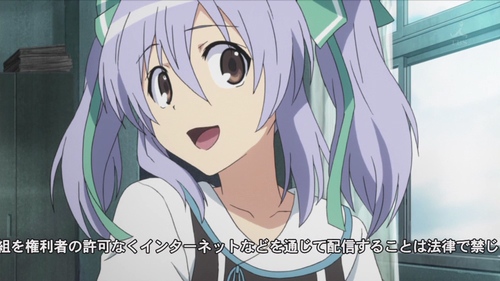 It could just be because I hadn't watched the series for a month or so, but it did seem as though that while inconsistent across the episode, overall the pacing is starting to pick up again, especially after the last one. The graphics and art in the daydream world scared me a little I'll admit (hey, shaddup!) but was well executed. I'm genuinely interested in what happens next, and hope they keep it up… must refrain from reading anime sites owing to the fact I'm several months behind now and the series has long since finished!

For a while in March when uni and work were under control, I was watching an episode and reporting on them every second day or so. Wonder if I can keep that up for a while again? Probably not, but worth a try. Rambling, pointless reviews don't actually take too long to write when you're not concerned with quality, as is evidently the case here! ^^;;;;.