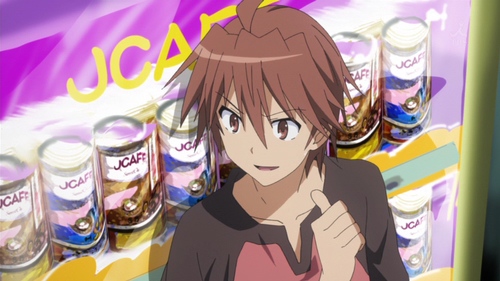 Nothing a refreshing can of JCAFE can't fix! Yumekui Merry #06: "Dream Encounter"

As if the writers realised that the last few episodes were a tad slower, this one started to drift into Bakemonogatari territory with the amount of complex dialogue explanations! By that I mean dialogue between characters explaining the situation with dreams, not explaining how dialogue itself works. Shaddup. Suffice to say, the lack of detail in the previous few episodes were sufficiently taken care of this round. In the cliffhanger (is that supposed to have a hyphen?) last episode, Merry had been told by Engi (the dream daemon who uses Yui as her vessel) that she could never return to her world, and understandably she suddenly lost her fighting spirit. Hey, spirit, that's a pun. Yumeji with his manliness obsession rushed forward to deflect damage, which of course failed miserably but gave Merry the motivation to finish the job.

In another ode to Sailor Moon and their very spiffy "attacks" that take a while to summon (which would have left them vulnerable during that time, right!?), this time Merry generates a powerful [and very pretty purplish] aura that destroys the moon, the lifegiving force during the dream. I think that's what caused the daydream to fall apart so they could return to reality. Maybe. Kinda? Not sure. It seemed so long ago since they'd entered that daydream that I'd forgotten they'd been grocery shopping and Merry still had the bags in her hand! Needless to say, when one enters the dream world, your clothes remain the same and the injuries you sustain in the dream world come with you to reality (ouch, what a twist! INCEPTION) BUT… you don't bring irrelevant objects with you into dreams that you happen to be holding. Like shopping bags. Considering what happens in these daydreams, its probably a good thing, they'd just get in the way. Of course things aren't that simple either, it turns out the dream daemon we thought Merry destroyed or sent whimpering back (aka Enri) is actually still "alive" (if that's the right word to use) and still using Yui as her human vessel… and that she may not be one of the bad guys after all. After said vessel Yui asks if Enri if she's okay, Yui's friend comes back who for some reason reminds me of Kafuka Fuura from Sayonara Zetsubou Sensei. If she had blond hair. Just saying. Anyway our struggling author and epic hat protagonists make their way home, and needless to say after being injured in a fight Yumeji struggles up into his room. Isana assumes they both look tired because they've been playing a lot of video games which Merry clearly hasn't got her fill of yet. They don't have video games in the dream world you see!

Yumeji collapses onto his bed, his injuries now too painful to bear. This time his dream returns him to that familiar weird cat world with the floating fish skeleton and Mr Phantom of The Opera, better known as John Doe. Instead of fighting though, some fanservicey nurses dressed as cats bandage up his wounds (of course!) and he's able to get John to explain some stuff. Allegedly that Pharoah Heracles that he and Merry had been asked about before, wait Pharos Heracles, is a nightmare dream daemon who entices others to enter "reality". Heracles may also know some information about Merry. Screw Inception dream machines that Leonardo DiCaprio has to use to join people into a shared dream, John is the guy who allows/enables Yumeji to enter other people's daydreams. And so on. At this point I must admit that… despite this episode attempting to be more dark and serious, this assertion made me laugh out loud! Sorry I can't bring myself to say LOL. Wait, I just did. LOL.

So get this: The upshot of dream daemons continuing to invade people's dreams… and its what the literary club is realising… is that teenagers in high school are losing motivation! They seem "listless" and "lethargic".

My sister and many of my friends, teenagers in high school, ME, we're lethargic and tired all the time because dream daemons are taking over our minds! It makes sense now! Anyway, not sure if that was a gentle jab at my generation by the writers or not, but I chuckled anyway ;) Speaking of writers and artists laughing at my generation… I didn't intend for this to be a regular feature, but Midriff Fanservice Watch counted far fewer this episode, most likely because plot kept getting in the way. OH NOES! I've already seen at least one forum post by a certain type of fan who was upset about this. I guess its all about what you expect to get from a series.

Anyway after we were left with that cliffhanger last episode, this time Yumeji finally wakes up and Merry is Teh Happeh ^___^. Will they continue to be a nightmare fighting duo? Having had his arse handed to him on a platter, will Yumeji continue trying to be macho, or will he be nervous about tackling people now? Will Isana have coffee with Chizuru again? Of course, I've already seen the title of the next one suggests its the Obligatory Beach Episode. Here's hoping that whole idea of a "plot" can make it bearable :P. Haha, "bearable" that's a bit of a pun too. I'm full of it today.