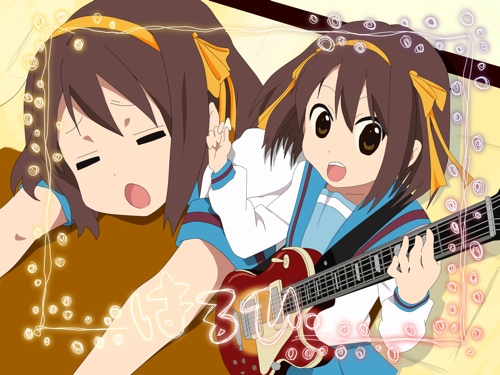 It's been a very weird day. In the morning I locked myself into my house by accident when I had a test (the subject of another post, don't worry it had a happy ending!), I tripped over and landed on my arse when walking to the train station on a perfectly flat footpath, and throughout the whole day my energy fluctuated more than a shot capacitor.

ASIDE: I wouldn’t know if that capacitor comparison was apt or not, I’m doing computer science not computer engineering. Dang circuit boards ain’t worth squat if software isn’t written for them, am I right science guys?

Anyway I saw this and thought it was hilarious enough for me to justify staying awake after all ^_^. For those who don't know, this is Hirasawa Yui from K-On! dressed up as Suzumiya Haruhi from her self-titled series. Despite having the getup down pat, somehow Yui just can't convey Harhui's sinisterness!

Ever since seeing the Flintstones Meet the Jetsons (did I get that the right way around?) when I was a tiny person I've loved seeing crossovers. Like when Haruhi showed that cover from Shuffle in the original series, or with all those references in Lucky Star. Or that scene in Code Geass when Lelouch said he'd met Captain Kathryn Janeway from the Federation Starship Voyager. Yeah, that happened, look it up.