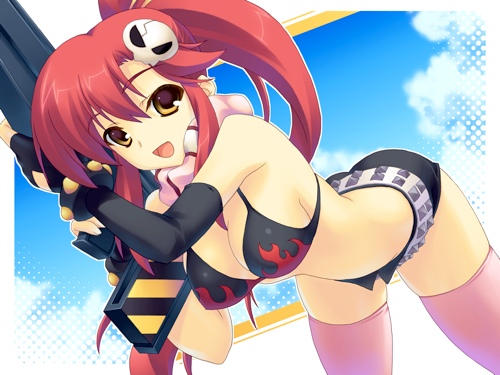 When the database for my original anime blog was wiped and I decided to start again in the anime category here, even though I still have all the images from it I decided I wouldn't bother recreating all of the posts. I already blog far too much and I have assignments to do!

One of the posts though that generated the most comments (over 20 if I remember) was my simple observation regarding Yoko from the Gurren Lagann series.

Yoko professed in the 5th episode that she chose to wear a bikini top all the time because it was something that "wouldn't restrict her movements in combat" (uh huh, sure) but… she also always wore a scarf, something you'd expect to wear when the weather is… oh I don't know off the top of my head… cold!? While I'm at it, I'm going to the beach to wear snow boots!

The question I posed was: huh?

We devised several theories. We must have been wrong all these years, it's not the top of the head or the ears that lose the most body heat in cold weather, it's the neck! Or perhaps subterranean civilisations have different climate patterns. Or maybe because she was so tall her neck pokes through to a different layer of atmosphere from the rest of her body. Or perhaps she was in fact a vampire the entire time and she was covering up bite marks. Or maybe she was bought off by the evil fashion scarf lobby. Or maybe she was just crazy and made no sense.

I guess they do say anime and manga don't follow any established laws of physics or fashion. What I love is when story writers for these shows attempt to explain such bizarre physics and fashion, it's like watching the characters explain a new gadget on Star Trek that will emit a certain energy pulse to disperse the astronomical anomaly that's affecting their ship's systems. You know it's all bunk, but you suspend disbelief and follow along anyway ^_^.