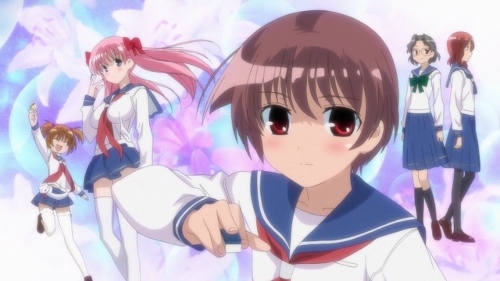 They play mahjong and they’re DANGEROUS!

What I love about slice of life anime like Saki and whatnot is how their own issues in their little universe seem so critically important that everything else pales in comparison and without being taken care of could destroy the very fabric of the space time continuum as they know it. Saki wants to go to the Mahjong Nationals?! Well this changes everything!!! When you think about it, that mirrors real life too for many of us. If I bump my RAM up to 4GiB I can run Oracle, and I'm an introverted loser! This changes everything!!!

I guess I misunderstood episode 02, but I was under the impression our intrepid Mahjong playing superhero Saki had already enrolled to join her school's Mahjong club, or perhaps she had but she hadn't made any commitment to the Nationals yet either through expressed intent or because she just kept playing +-0. Does that make sense? Does anything I ever write make sense? If I had the time I'd draw up one of my erroneously described super detailed diagrams to make sense of it. 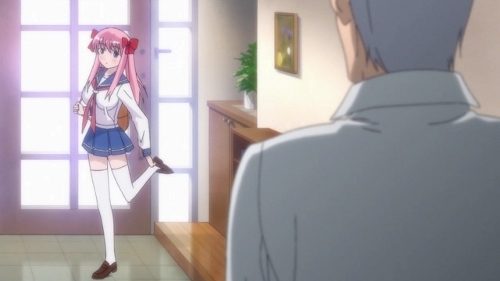 "You kids with your mahjong and your loud music!"

We learn in this episode that Nodoka became an Epic Mahjong Player of Super Awesomeness by playing online into the wee hours of the morning, and after a brief encounter with a reporter and her cameraman who only wants to take pictures of Nodoka's boobs and who gets a whack to the head as a result (aaaah anime) we learn she appeared regularly in mahjong magazines given she was such an epic player. Are there mahjong magazines in Australia or Singapore? I'd read them! 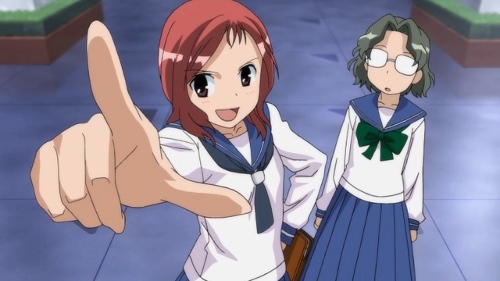 Given they have such a great team now that Her Sakiness has arrived, Hisa and Mako decide it's finally time to enrol their school mahjong club in the Nationals (I'm assuming the championship not the insignificant Australian political party. You're allowed to laugh, why the silence?), so they go to the revered halls where the events will be taking place and sign up for the first time, and to see who they're competing against. I know Kyoutarou is a bloke, but I saw very few others in that hall, mahjong isn't a so called girls game is it? Is it okay for me to admit to liking it? Ah never mind, back to my purple themed computer and business shirts. It's my favourite colour dontchaknow?

Back at the club and the gang sans Hisa and Mako are playing a game of… brace yourselves… mahjong, when Yuki begins to get frustrated over not winning a game for a while, so Saki passes off another mind bogglingly good set to let her win a round. When Nodoka notices, she flips out (if you'll pardon the Mahjong related pun) and storms out with Saki running along behind her. 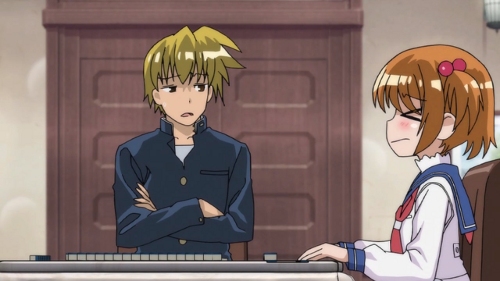 "Sorry, there’s no way your hairstyle is more awesome than mine."

This is where what I was talking about before with frames of reference in our own narrow interests start playing (I'm sorry, I'll work on my puns better for the next one) out. Nodoka confesses the reason why she acted so cold to Saki isn't because her name sounds like a type of rice wine of which I am quite partial but nobody else in my family is (canned laughter, thank you!), but because she doesn't think Saki is taking the game seriously, and if they want to enter the Nationals she'll need to be at the top of her game. Canned laugher? Doesn't Sake come in bottles? 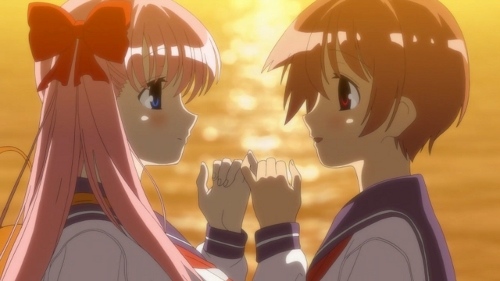 In a climactic moment of reverence that rivals all the cheesy love confessions in far too many anime series I would never admit to watching here (Shuffle! cough cough!), Saki gulps and exclaims that YES she wants to take her team to the Nationals! Like a typical girl in the aforementioned type of scene, the light behind Nodoka changes, she gasps and her hair flails wildly in the wind! Are you sure Saki? You willing to put all your effort in? Wow, this changes everything! Cue dramatic exit. Oh yeah, and to make life interesting, Saki's sister who lives in The City is a legendary mahjong player that Nodoka is aware of but who Saki hasn't been in contact with for a while.

I guess you could say the mahjong table has been set for the rest of the series. Of course, if you weren't very witty and that's the best thing you could come up with. It's 7am on a Sunday and I have to study and work all day, so my wittiness isn't up to its usual calibre. My wittiness has calibre? 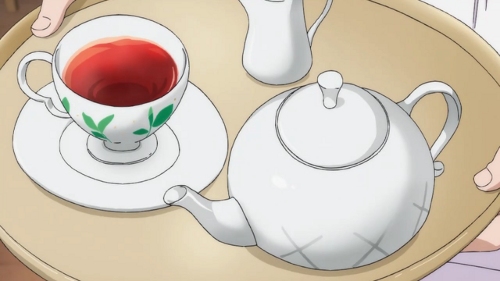