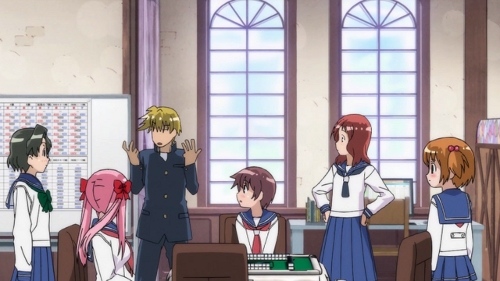 Wait… you people make no sense!

I didn't think I was going to watch more Saki, but I needed a break from studying a bit this afternoon and I admit I was curious to see whether Saki (the namesake of the series, I wasn't personifying it!) did end up joining the mahjong club or not. Well okay I was pretty much certain she would given that it wouldn't make much sense to have a series named after a person who wasn't in it. I have to tell people I'm hilarious sometimes otherwise they'd forget.

In this episode we learn why Saki claimed she didn't like mahjong, it turns out playing it with her family gave the whole game bad associations. Like with me and Yiftiko, as far as I care the only person I could ever play that with was my mum. I'm assuming her family must have been pretty competitive and brutal for her to be put off it so severely, perhaps they started throwing tiles at her when she won or threatened to, or forced her to eat some of them. Yeah, that must be it. 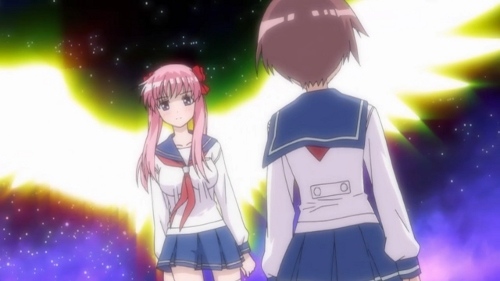 Uh, you might want to get that checked out Nodoka.

Her Pink Nodokaness really shows her true form in this episode, after we've seen her introduction full of halos, aura and whatnot she comes off as a bit of a spoilt brat in this one. I mean come on, Saki sees her with wings in one scene! I theorised in the previous episode that she must have severe back problems due to the animators giving her such ridiculously large breasts, but perhaps they just make her irritable, in which case I can sympathise (without relating of course). When Saki is tricked into thinking she's playing for +-0 and she wins, Nodoka runs out crying at her defeat and later confides in Saki that it upsets her that someone who didn't really like mahjong beat someone like her who loved it. Humiliation She Wrote! 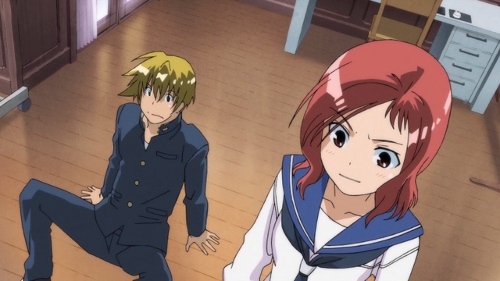 Hisa… what have you unleashed on the world!!??

Well Saki does some serious thinking and determines it wasn't the mahjong she hated, it was the fact that Ruben played it so much in high school and he still spells the game wrong sometimes much to the irriration of the computer spell checking whatsit. Oh, and she just had bad memories attached to it. When she has a discussion with her dad (her parents split up perhaps?) and does some thinking (hey, I just said that) she decided to join the club after all, even saying innocently that she looks forward to playing against Nodoka again. Zing!

And what's this? The club leader set this all up to fall into place the way it did from the beginning? She's obviously an intelligent and extremely scary person, or she takes credit for random occurances. I tried that once, but the resulting litigation wasn't worth the trouble. I made that up. 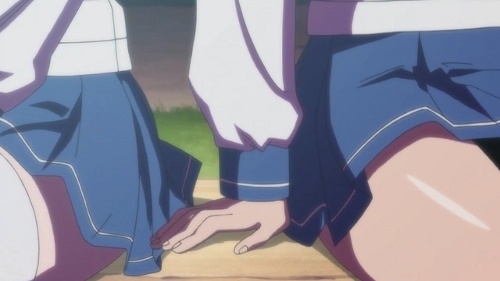 Nodoka, do you mind if I wear *pants* next time?

The fanservice was slightly easier to deal with compared to it in episode 01 even though it did seem to still have some… shall we say, "overly opportunistic" camera angles and especially Nodoka's and Saki's clothes do seem to be a bit over the top, especially when the seniors can dress normally. I know different grades have different colours and whatnot, but that seems to be a bit of a leap. I know, I know, it's Gonzo, I should expect it :P. 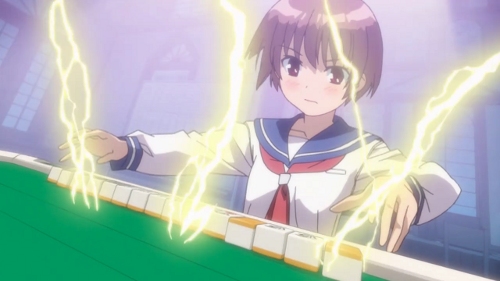 Hmm, these sparks can’t be good for the felt…

Gonzo made up for this though by still having all the intense electrical lightning effects whenever an epic mahjong move was made which is just awesome! I'm putting this tile down, take THAT! Noooo! Zap! POW! Kablam! Sugoi, no way! Impossible! The classic Batman would have been proud.

There are so many serious anime review sites out there with trillions of screenshots and detailed plot analysis that don't contain pointless anecdotes. POW! Zap! I decided not to do that.