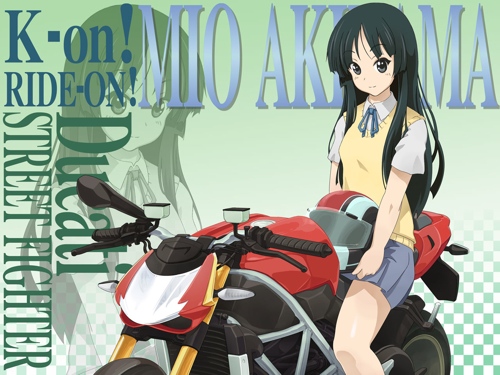 I know I only just posted about Akiyama Mio from K-On but this picture by Pixiv member 198353 was too good. In hindsight I should have put this picture on that aformentioned blog post instead of the one I ended up with, but oh well.

Anyway here we have Mio on a Ducati no less! I wonder if she's met Casey Stoner?

I'll get my motorcycle licence one of these days, it's on my laundry list length to do list (try saying that quickly five times in a row!). Once I do I'll get a fuel efficient Piaggio scooter for quick trips and a small, bright yellow Ducati for longer ones. I know I'm supposed to get a red one, but I saw a couple of yellow ones in Singapore and they were pretty damn swish. This is of course after I've won the lottery and stopped wasting money on computers.

Update 2019: Attributed the Pixiv artist, though they’ve since closed their account which is a shame.