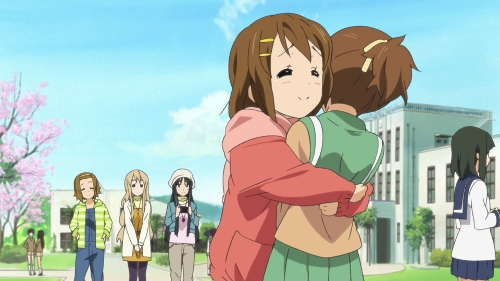 I so thoroughly enjoyed reviewing the previous episode of K-On! without really talking much about at all, I thought I’d repeat this winning recipe. Recipe, dang I could use some of their tea and cake, I wish there had been a music club like theirs when I was still in high school!

While I’m obviously way behind given the second season has started, I’ve seen enough of the rheims of fanart (doesn’t Rheem make water heaters?) that I knew what to expect from this one. You know where I’m going with this, so much so I’m phrasing this sentence as a statement and not a question. 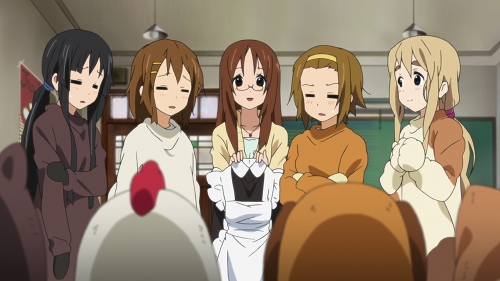 Yes, this episode was all about the girls from the light music club dressing in very formal attire which, I admit, was quite a gamble seeing as the otaku community haven’t really been exposed to such an idea before and haven’t seemed to be very receptive to it. Apparently there are even cafes in Japan and Singapore where people dress up in such clothing, though obviously nerdy guys are forced to attend them because they wouldn’t want to otherwise.

Kyoani and the original manga writers and artists really went out on a limb here, which I assume would be quite painful given I banged one of my shins on a table this morning and I yelped. Isn’t that a phone company? This whole paragraph with its intentional misunderstandings was terrible even by my own standards which is scary. My anime review writing standards are the stuff of Halloween legends, at least that’s what I’ve been told, by me. 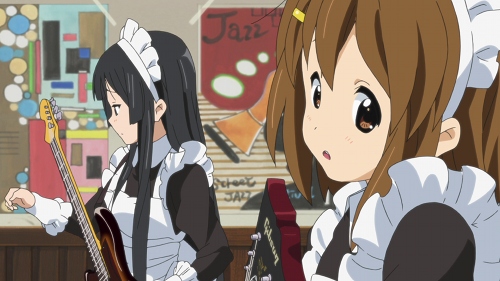 The trackpad on my laptop just stopped working for some reason, and the lights at the cafe I’m typing this at just flickered as a lightling bolt hit outside. I think the Gods are telling me to stop going so flagrantly off point and get back to reviewing. Either that or my tracking finger has stopped working. That really didn’t sound right.

Okay, so what was I talking about? Oh yeah, eyebrows. I’d never really paid any attention to them before until I realised just how few characters in animated programmes had them, or if they did they were just pencil lines. Some people in the real world even get by with just pencil line eyebrows, what a lot of work. 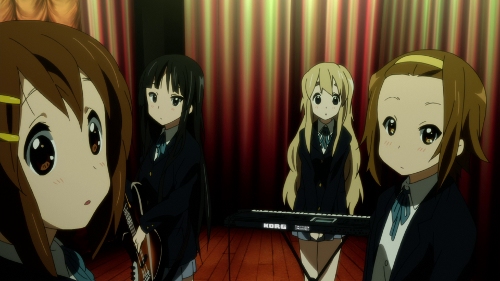 Eh I give up, at some point in a review about an episode I should talk about… the episode. Right? So in this episode Yui’s sister graduates and joins the other girls. The Light Music club tried their best to recruit other members by putting on a kick arse concert that’s packed to the rafters… sorry, that bad Aussie comedy ruined that expression for me. Packed… yeah, it was packed.

See this is where my cognitave dissonance starts coming in. The obsessive senpai who dresses the girls in ridiculous outfits and the fact the Hirasawa siblings have never seemed to have had an argument I can deal with, but how could you put on a show like that and get nobody? I suppose Japanese society is even more conservative than I thought :P 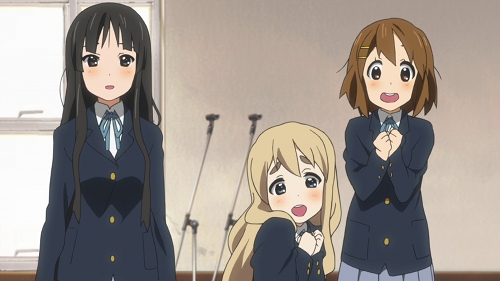 I… well, that is to say… um, that is… I was thinking… um… Mugi!!! Wait, sorry I got distracted again. What I will say though is even though everyone else no doubt was more interested in seeing Azusa (the only person interested in joining!) I appreciated the fact Mugi was in it more. Everyone thinks Mio is the best, and for a period of time I agreed with them, but we all know Mugi is now, right?

And they wonder why they can’t get anyone to join their club when this is what they get as a welcome! Well that first part was okay, but being crushed… though I can imagine some people would go for that… Mio and Azusa are the only ones pulling reasonable expressions! Wait, that’s not what I meant. I think I’ll sleep now. 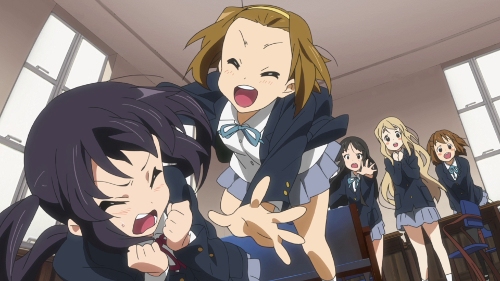