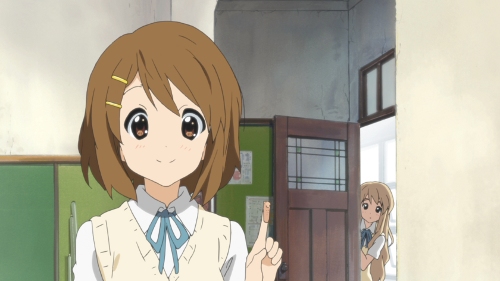 Hey, now I have something to show Mio!

It's ironic that I often blog about nonsense and fun stuff when I'm madly studying; perhaps its a coping mechanism or something of that nature. Whatever it is, it works!

Having given K-On a break for a month or so I especially felt the need for some light hearted silliness this evening, so I started up again from episode 5. The Blu Ray versions are pretty spectacular, my aging 2006 era MacBook Pro can barely run them without dropping a few frames a second but they're still worth it! Now if only I had time to track down a scaling algorithm that didn't suck since I moved up to Snow Leopard… 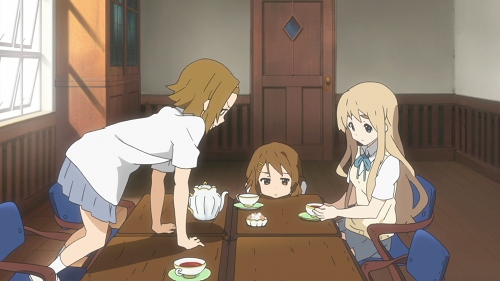 We're not a club, and we're out of cake!

Having come back from their weekend training camp whatsit, in this episode the girls continue to prepare for the school festival while dealing with a few teeny small little insignificant problems such as not having a supervisor, not being a legitimate club, not having any lyrics in their songs and not having a lead vocalist! Yeah I'm going to start a SQLite club, we have no computers, no source code and our lead programmer only does COBOL. We're set!

This is why I unabashedly love this show so much, the characters are real human beings that get distracted and worried about regular stuff. Say for example a certain light music club member who forgot to lodge the form to start the light music club even after getting four members because… she was distracted by eating cake. Happens to the best of us, don't sweat it. Anyone feel like making me a cake? Anyone? 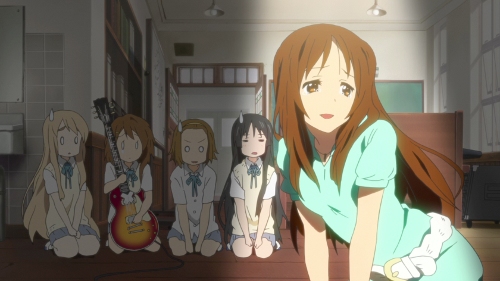 I can tell you're all fascinated by my epic story, right?

What is particularly shocking and shocking (did I say that twice?) in this entire episode though is we learn our beloved sensei who's so sweet and nice turns out to have been… a guitarist for a rock band! I know, crazy and intense stuff! To appeal to a guy she liked who claimed she was too quiet (a quality I'm actually looking for not trying to discourage!) she became a wild, loud musician with crazy makeup and clothes; unfortunately she was photographed as such and the K-On girls find the evidence. Oh no, her cover has been blown! 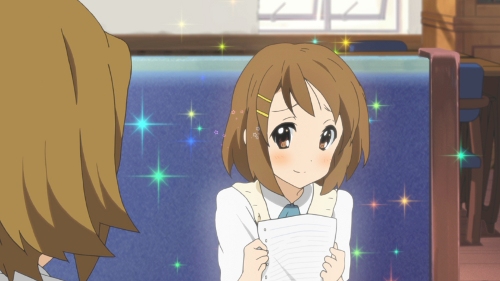 Any other volunteers…? Come on… anyone…?

This is an especially cute episode, there seemed to be a disproportionately (what a verbose term) higher number of stills and frames existing just to show the characters in various teardrop uh-oh and whoops moments. If my sis watched it no doubt she would have said "awwwww!" a few times.

What I love is the… timing. Get it? Ah never mind. I love the timing because we get epic shots of Yui for example, then the camera pans to someone else who mutters something disparaging, and a humorous scuffle ensues! People claim K-On is just a moe-blob show which it may be, but at least it doesn't take itself too seriously; there are plenty of shows that would do such scenes on purpose without any sarcasm. Not that I would admit to watching such things mind ;) 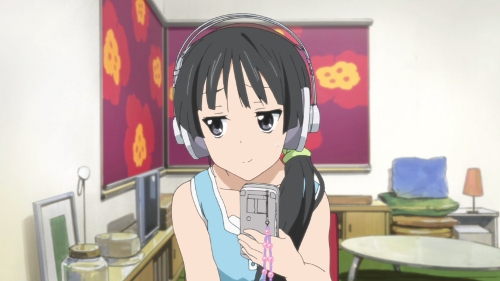 This is also the episode with that infamous scene with Mio attempting to write lyrics as she listens through her expensive audiophile headphones that otaku across Japan rushed out to buy as soon as they saw her using them. I had no idea anime had that much of an impact; did people who watched Code Geass end up eating pizza as much?

And now if you'd excuse me, I have to go and drink several litres of black coffee because this episode was just too sweet ^_^. 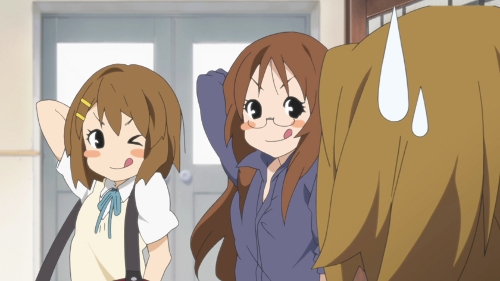