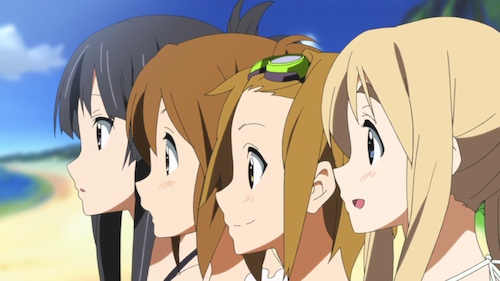 Those who have watched anime for long enough know that it's almost a rite of passage for most shows to feature one fanservice filled beach episode where the tenuous plot is designed to show off their characters in swimsuits. Most leave such episodes for later, but we got K-On's in episode 04. Fortunately in this case it wasn't as blatant (relatively speaking), and as a bonus there was a real plot! I know, I was shocked too!

It's been over three months (wow really?) since we started watching the girls form their light music club in episode 01 and Mio is starting to worry they're not making any progress. It turns out she's suffering from a severe case of inferiority complex after she stumbles upon a series of tapes recorded by the previous light music club and she feels the other girls aren't taking the club seriously. 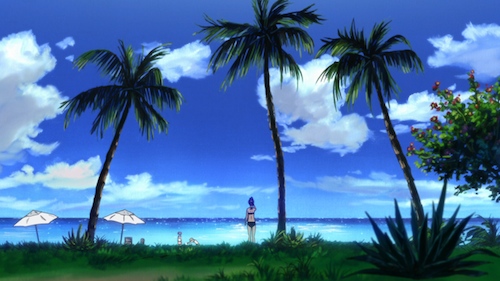 "Now where did I put my sandals?"

After we're reminded of Tsumugi's amazing family wealth it's decided they all go on a training camp in one of her private villas near the beach. The train trip starts early enough that they all nearly miss it, but they board safely and Ritsu jolts Tsumugi awake by taking flash photos of her while she dozes off in the chair. FLASH! Wait… huh, where am I?

The villa is amazing of course and so too is the music room with a drum kit and keyboard already set up, but Yui and Ritsu are too busy changing and wanting to go down to the beach to notice or care! Despite being cast as the shy moe character, Mio spends more time with Tsumugi almost in parental roles to Yui and Ritsu who seemed to have lost all sense of responsibility! 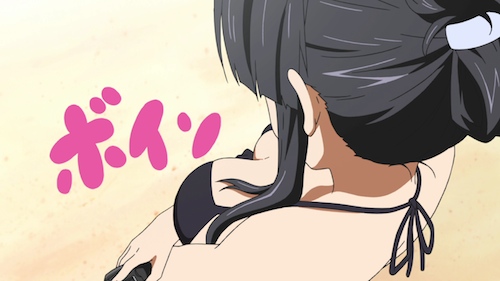 "Did I just hear a spring or something?"

They end up spending most of the day at the beach and they soon realise why Mio was itching to practise instead; she's afraid of barnacles and other icky sea stuff, and suffice to say she "filled out" her swimsuit rather well, much to the astonishment of Yui and Ritsu. Of course her introduction included several BOING! sounds… ah you've got to love the anime sense of humour ;-).

When they finally file indoors to do some practise the sun is setting and both Ritsu and Yui end up lying on the floor which only serves to exacerbate Mio further! When Yui finally gets around to playing her new guitar though, she actually makes some amazing sounds for the first time. As with her exams, it seems she has the uncanny ability to perform ridiculously well at something after being so terrible at it just shortly before. If only all our own talents were so easily brought out! 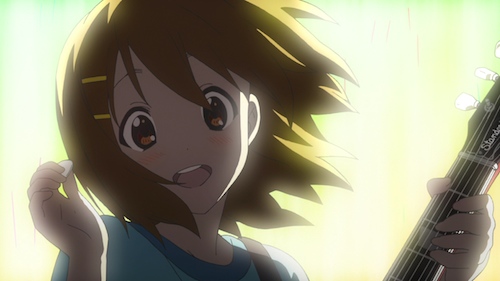 Towards the end they find themselves outside in the dark looking out over the water, and the girls surprise Mio by setting up a wall of fireworks to go off as Yui plays her guitar. It was very pretty and Mio is taken aback, aww. Personally I would have been scared out of my mind having all that stuff suddenly go off and given how timid she is I would have expected the same from her, but oh well :). Yui positively glows… until the fireworks run out!

Oh yeah, and they also manage to fit in some typical fanservicey hot spring action too at the end, but fortunately nothing over a G rating. I think they just wanted another chance to show Mio blushing… you know I'm right. I can feel another nonsensical Know Your Anime Moods post coming up!

And for the first time since the series started, it seems the girls finally have the beginnings for what it takes to perform at the culture festival, and only on episode 04! 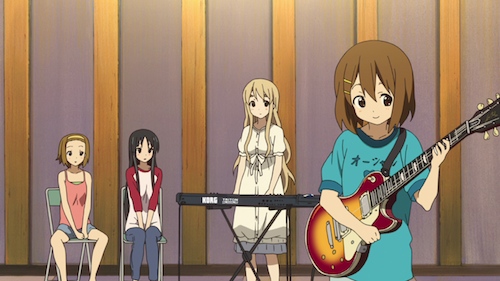 "No way, she can actually play it now!?"

Gosh darn watching this happy show is so uplifting :).