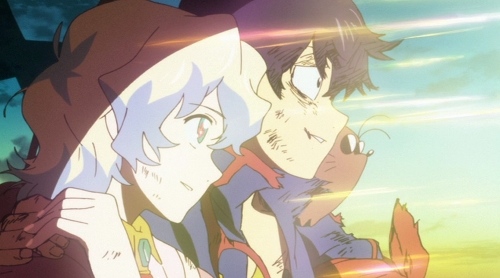 Plot: Having set the wheels in motion for the destruction of The Capital, the giant cylindrical buildings that bear a striking resemblance to the Peachtree tower in Atlanta begin falling from the sky and Tepellin is revealed in its true form.

Art: The explosions and weapons fire were little more than lines of colour and circles of pale yellow, presumably to save on production costs as they’re simple to animate. Still, they put on quite the light show. 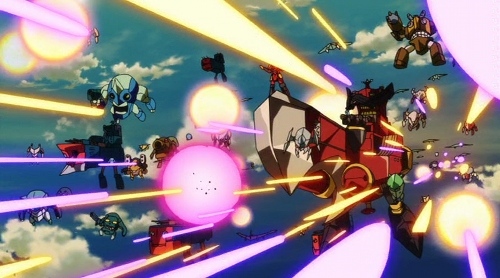 Tactics: Initially I was horrified at seeing how they mutilated and destroyed large swaths of Dai Gurren, before Yoko reminded us in her narration role on the bridge (again) that defeating the Spiral King and forcing him to confront the daughter he cast away were the entire reason for the mission. Had they been more cautious, they most likely would have failed. Are there life lessons in this anime?

Pride: That (seemingly false) modesty imposed by the four generals so as to not dignify these petty humans with too much of their time and firepower? Seems as though the Spiral King wasn’t going to make the same mistake, launching a barrage of ships. 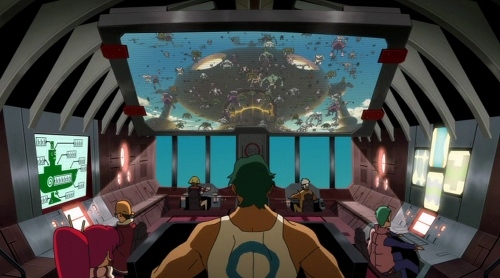 Graphics: Starfleet ships have LCARS (a version of which I posted about earlier today, ironically enough!), and Dai-Gurren is equipped with icons from various warning and emergency exit signs. I’ve got to say, the latter makes far more sense!

Expectations: Every single episode I’ve thought Simon and Kamina, then Team Gurren Lagann, then Team Dai-Gurren would be toast, and every time I was proven thoroughly wrong due to a combination of advantageous circumstances, strategy, strong teamwork, and Gunmen devices that seem to defy virtually all laws of physics. This time I was almost certain they wouldn’t make it, again. 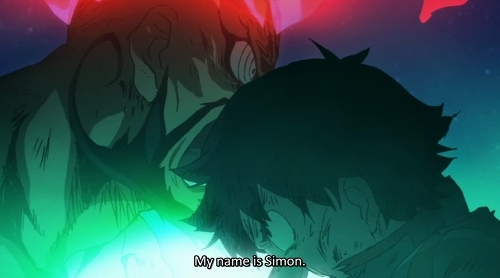 Metaphors: Namely, drills. They’re what give Simon the strength and physical capability to do his job in his subterranean village way back in episode 01, they give him the ability to pilot his Gunmen Lagann with such dexterity and skill, and they’re even the source of the King’s power. Ultimately, a simple one is responsible for his downfall.

Heart tugging: When Nia sits on Simon’s lap so they could go see her father. When she and Simon sit together during the battle with their eyes ablaze. When Simon is potentially in his final throes and she exclaims she believes in him with all her heart. When the battle is over and Simon places his hand on her shoulder, then cuddles her close while they see their allies and friends coming to them. I’m a fan of this stuff, I’m unashamed! 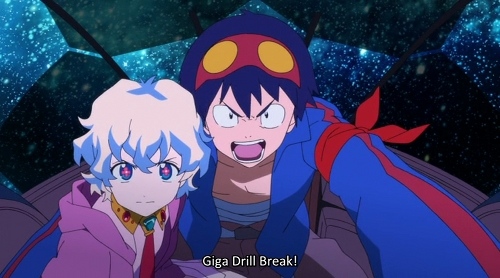 Relativity: When Nia confronts her father again and exclaims her horror at what she perceives to be his lack of morals. I get the feeling we’re going to learn the issue isn’t as black and white as what we’re being lead to believe at this point, but for now you can understand where she’s coming from… well, where they’re all coming from.

Unanswered questions: Who/what were inside all those buildings they just destroyed? Were they buildings? Why would such a powerful Spiral King be so unkempt, surely he would have access to excellent grooming facilities? 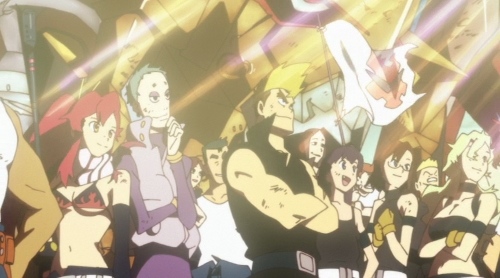 Conclusion: After coming all this way, and with all the obstacles and pessimism in the world, they made it to the capital and had took care of business, with their flag emblazoned with the late Kamina's sunglasses. There's jubilation, and optimism! The world is finally theirs!

Still, why do I get the feeling they've just opened the proverbial can of worms with this? 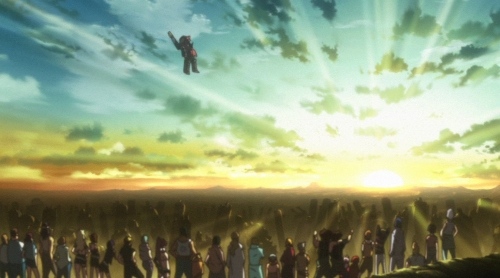