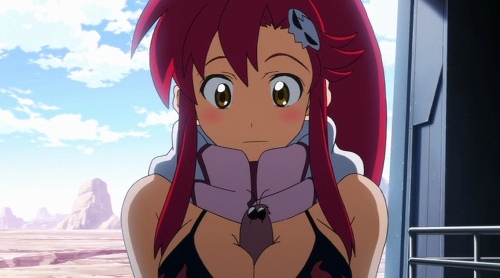 The infamous Boota episode of Gurren Lagann of which I've seen screenshots from online for years!

Plot: Trudging ever closer to The Capital again, the more monotonous parts of their journey provide a setting for some character development, before they come under siege from above with some serious avian firepower. 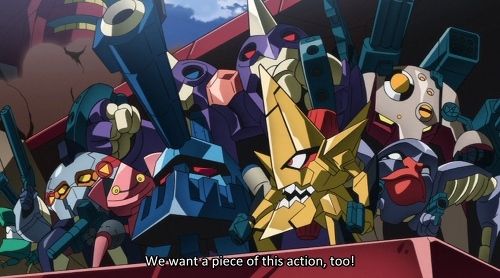 Soundtrack: I don’t know what the music was, but it sounded terribly Mission Impossible-esque. While I thoroughly approved and thought it fitting, The Bird is The Word would have made for an even better musical score, given their avian enemy today. Picture it: Yoko firing her gigantic gun at The Enemy with an epic pose, hair flying behind her, with Bird Bird Bird, B-Bird’s the Word, or during the final gigantic explosion. Just saying.

Boota: The best way for a little pet to motivate people is to launch himself into the air and land in an opportune place. I suppose such a position would offer the most cushioning were something bad to happen. Cushions are soft ^_^. 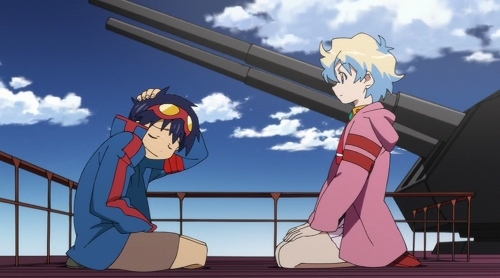 Expectations: With Simon blushing and Nia looking expectantly at him on deck, we think she’s going to profess liking him, but instead offers a more practical suggestion for the use of their time. They’re supposed to be together, come on guys!

Technology: Not only can Gunmen be commandeered on the surface after being defeated, they can be skewered in mid-flight and integrated! That’s so… phisticated. 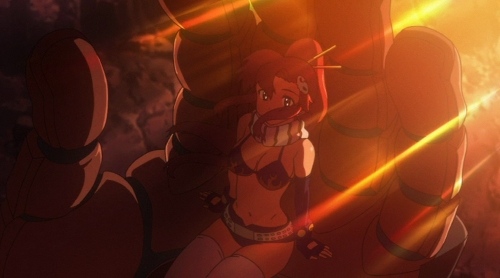 Strength: What I’m really liking about Gurren Lagann is each character is strong in their own way, and that they save and help each other rather than always just having one strong character and a damsel or doofus in distress. Today it was Simon’s turn to rescue Yoko instead of the other way round, and seeing her cradled in Lagann’s arms was just adorable. Simon is growing up :).

Physics: Despite looking and acting almost magical, these Gunmen devices do possess some technological devices to help them achieve said effect. Case in point, the Dai-Gunten fortress hovers due to two large orbs, one of which is destroyed and the other caught by Dai-Gurren like a gigantic basket ball. There’s a Futurama Harlem Globetrotters reference in there somewhere. 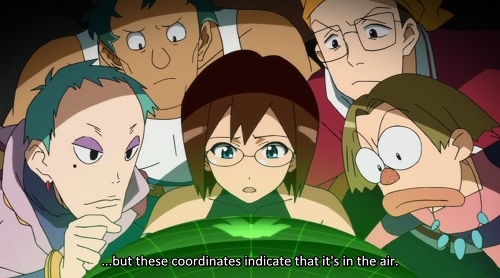 Tactics: In the last episode I’d talked about how the generals had attempted to shoot them, blow them up, squish them and trick them. Clearly none of those had worked, so the last general with a settle to score decided to do something different and… blow them up. You’d think those with a sophisticated air force and hovering fortress could have been more creative than that ;).

Fanservice: Before each episode, Gainax show summaries of what happened in the previous episode, something which presumably would be irritating if you were watching them all in an afternoon, but are really helpful for a silly guy like me who likes watching one a day! That said, for their summary of the fighting scene in episode #12, they decided to illustrate it with… a close-up of Yoko’s flapping swimsuit skirt. There were so many great shots they could have used, like the one where she’s standing there firing from the deck of Dai-Gurren with her colleagues looking on! Oh well, Gainax just trolling us again :P 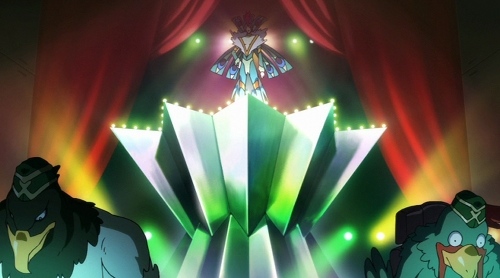 Costume: Their enemy of the day’s colourful, towering imposing plumage was rather fetching. I’d love a outfit designed like that for an anime convention cosplay costume. I’d look fabulous!

Honour: Despite presumably being a scoundrel and the enemy of Humans, Viral bows to Simon’s call that taking Yoko’s hostage was playing dirty. He may have a personal vendetta against [who he thought was] Kamina, and he’s potentially putting his own neck in a noose with the generals, but he has honour. Perhaps. 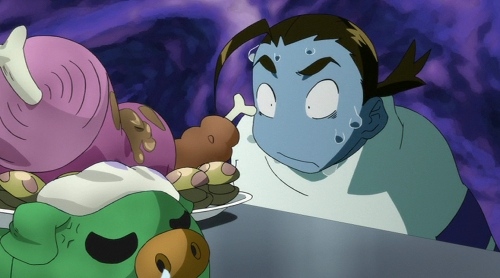 Stereotypes: It’s a favourite in anime that a cute, nice character everyone likes tries their hand (or both hands, in fact) at cooking, and people feel bad telling him/her just how… awful their food is! I think that happens when I cook for people. In any case, Rossiu takes one for the team, and subsequently spends time in the infirmary… speaking of honour!

Metaphors: The Spiral King offers us a glance at his own glowing drill device, suggesting its an integral part of something much larger, rather than just Simon’s symbol of hope. 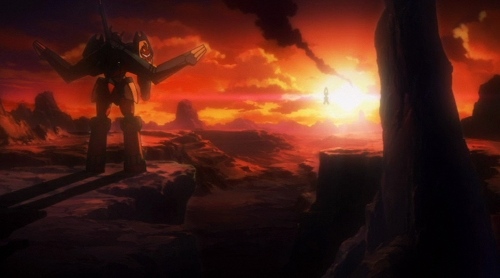 Pronunciation: On a recent phone call, I was called out for pronouncing Simon as… Simon! In the anime he’s Schee-mon, and that’s how you’re supposed to say it! Point taken.

Cliffhanger: Who are humans? Spiral King, you evil cliff hanging devil you!