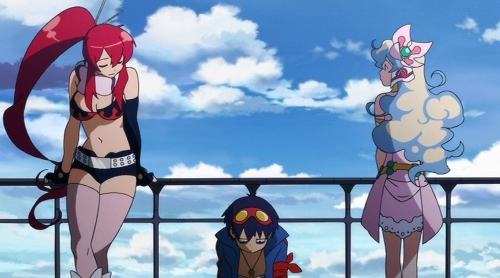 The first double digit episode of Gurren Lagann and progress seems to have stalled in solving some issues. At least they kicked arse again, quite literally this time.

Plot: Having rescued Nia from her cryogenic chamber thingy, Simon slumps back into depression given he feels personally responsible for his brother's passing. They're confronted by Adiane, one of the Spiral King's generals, but a combination of stalling tactics and ultimately getting their Dai-Gurren ship working enough again leads them to temporary victory. Not that it matters much to Simon. 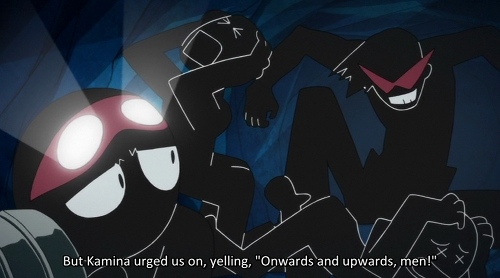 Art: Lots of really nice clouds. I love clouds, it's why Sola was such an enjoyable (though sad) anime, and why I've always wanted a super wide angle Tokina lens for my D60. I heart clouds, and they provided some really beautiful backdrops.

Relationships: Strained. Despite seemingly having a crush on her in the previous episode, Simon's resurgent cold and distant emotional state renders him largely oblivious to her. Yoko's anger at what she sees as a talking down by Nia when she tries to apply logic to an emotional state only makes things more frosty. 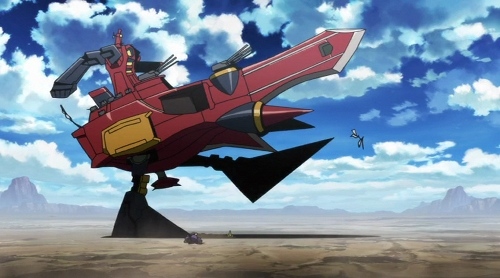 Tactics: A gigantic Gunmen ship's best weapon isn't its artillery arsenal (or Manchester United), but the feet it walks on and their ability to kick. Not roundhouse kick though, that's a Chuck Norris trademark. Was the Chuck Norris Facts meme around in 2008? It was, wasn't it? UPDATE: Seems as early as 2007 according to this post I wrote which features FreeBSD, Mikuru and Chuck Norris. Really.

Technology: Despite being an advanced piece of technology, Dai-Gurren can seemingly be disabled and kick started by having a spaghetti bundle of power cords plugged in again. Reminds me of my DIY Sim Lim Square machine. 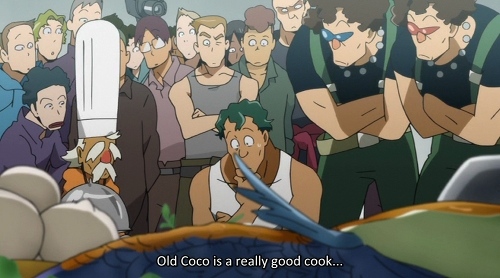 Secondary Characters: Coco is a good cook. Coco is awesome :).

Backfire: Despite realising she's a princess and daughter of their sworn enemy, her interrogation at the dinner table ends up being more of a language lesson for the relatively innocent Nia, and a comedic break from this otherwise heavy episode. We learn more when she confronts Adiane on the deck of Dai-Gurren. 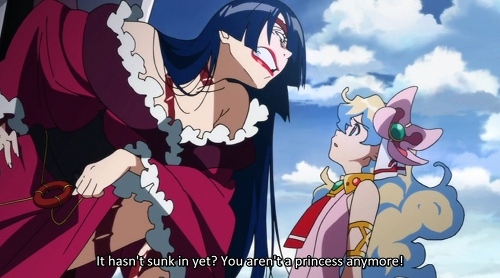 Explanations: The reason she was in a cryogenic status pod thing was what we probably all expected – she was abandoned. As such, we can only assume the Spiral King will continue to hunt them down again.

Pride: Kamina never stood down from a fight, and seemingly the Spiral King's cronies, pawns, generals or whoever they are… are no different. 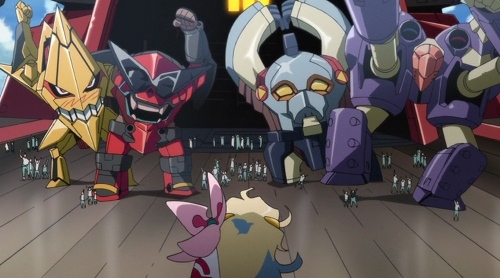 Conclusions: Simon is still understandably upset, but so much so that his fleeting interest in Nia has seemingly disappeared. The rest of the crew of Dai-Gurren seem to have warmed to her though, owing to the applause and happy faces after the retreat of their enemies.

Hope Simon can forgive himself soon. 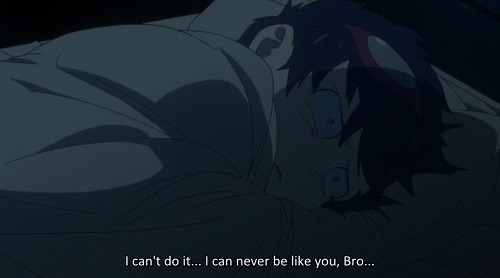