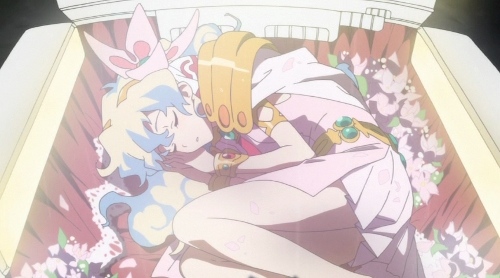 Not all of this Gurren Lagann episode was a downer!

Plot: Team DAI-GURREN are understandably mopey and upset after losing Kamina, but especially Simon who blames himself for his death. Understandably, despite their comfortable new home morale isn't terribly high. Still, a series of severe malfunctions (presumably caused by his mood) lead Simon to make a discovery that you can tell will be pivotal to the course of the series. 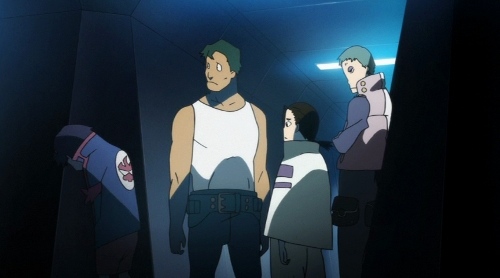 Science fiction: The series further morphs into science fiction now the primary setting is their new ship. They have a full crew. The layout of the bridge, the crew quarters, the shuttle bay (or would it be the Gunmen bay?), even the whoosh sounds of the doors are all eerily Star Trek-esque. Only the round portholes and the external views of the turret guns look turn-of-the-century.

Settings: Their new ship (itself a Gunmen, as almost everything is), but we also get a glimpse into The Enemy Lair of the Spiral King, complete with drill-shaped chandeliers and mood lighting. When his minions leave and he's left to ponder his next move, the ground turns transparent revealing a gigantic fortress. Or maybe they're buildings. Or maybe they're part of an even larger ship or Gunmen, don't know yet. 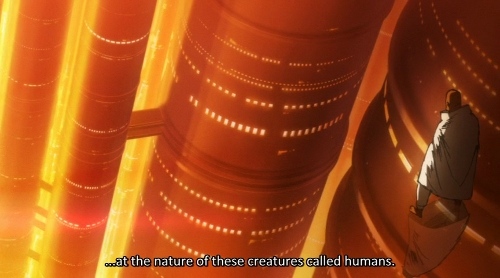 Perspective: For people used to living underground in drilled out holes, the idea of having proper furniture and rooms would be pretty amazing. Yoko mentioned it was pouring with rain outside, yet she was still able to perform target practice in the ship's firing range, and have a hot meal. Still, none of this luxury really means anything if you're not in a positive mood to appreciate it. 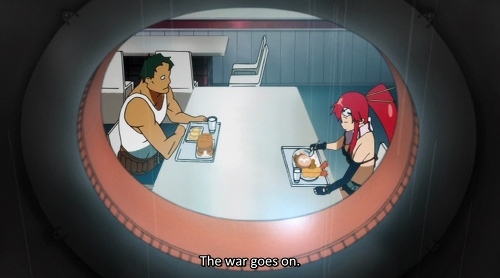 Relationships: Simon is understandably upset and feels personally responsible, though he isn't the only one. Tensions are running high, and barbs are thrown. Surprisingly I thought, Yoko does little to console him; perhaps she resents him as well?

Acquaintances: The one shining, happy moment comes when Simon unlocks and frees a potential new friend, Nia. Assuming their visuals represent the same ideas as Star Trek or most other science fiction, we can assume the box she came from was a cryogenic freezer that kept her in suspended animation, though we don't know why. Who is she? 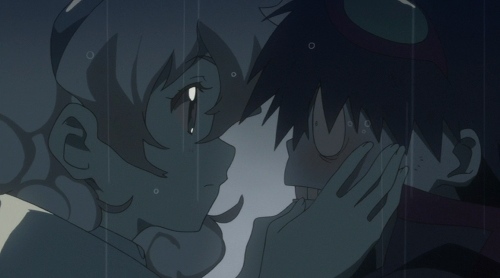 Rain metaphor: Just as horror films have to be shot at night, episodes where emotions are running high because of personal loss must be set in depressing weather, to be magically lifted when moods change and when someone special arrives in your life who makes it all better.

Love interest: Well, maybe just a crush at this point, though it was developed quickly enough that he was willing to defend her with his life. And for someone who was clearly interested in someone else, Yoko's reaction was surprising ;). 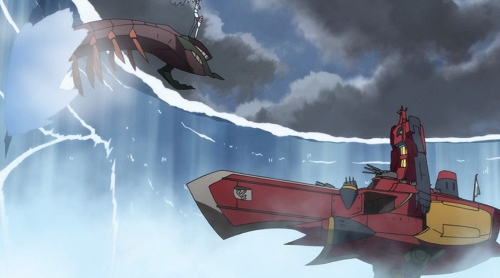 Team colours: Much as Gurren Lagann adopted their signature red and yellow, so too did their captured Dai-Gurren ship. Much nicer than the grey, I have to say.

Heart tugging: When my mum moved on, the last thing I wanted was to be told things by people, even if they meant well. Rossiu sees Simon and wants to help, but Yoko tells him to stay away. It was… refreshing. If this were a Western series, no doubt there would have been an intervention with many people saying its important to express feelings over and over again. 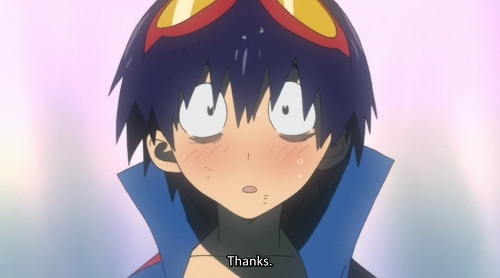 Conclusion: In the Gurren Lagann universe a week had past since Kamina's passing, though everyone is still understandably shaken and sad, which was a bit of a downer to watch. Still, the way they introduced Nia's to Simon towards the end after all he'd been through was so sweet, and her ability to block a sudden attack was a hell of a cliffhanger, so they've got me hooked for the next episode!

I don't suppose anyone makes Nia figures, do they? ^^; 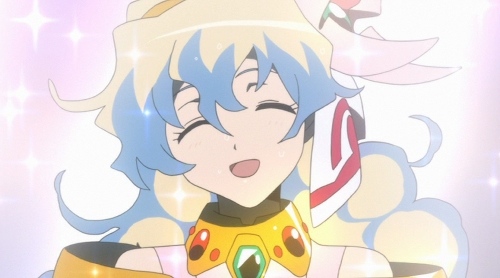