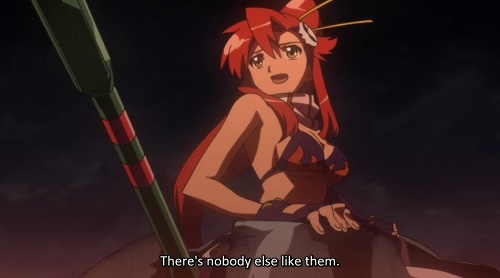 Starting our second week of Gurren Lagann with an episode I couldn't summarise any more than this… any less wouldn't do it justice.

Plot: After setting themselves up for something seemingly even more impossible than anything they'd attempted before, they go right ahead and do it. 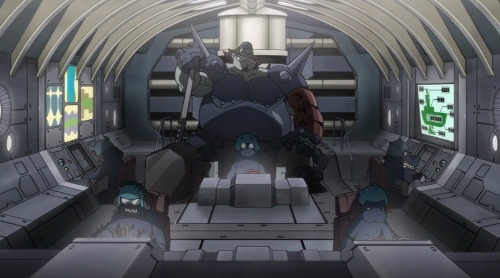 Design: We see into the bridge of the Arc-Gurren battleship in more detail this episode. As a boy brought up on Star Trek, Firefly fascinated me with its dystopian, retro-new designs for the ships and bridges, and Gurren Lagann (the series) takes this to an extreme. They really do appear turn-of-the-century inside with bulkheads and hull plates that look as though they've been lifted from old submarines, along with high tech computer equipment. I'm a nerd, I admit this is one aspect of the series I'm really, really enjoying!

Art: Some of the most beautiful of the series so far. The night and early morning scenes with the lights amongst the greenery with the wild desert and volcanoes in the background was a powerful image, and this coming from someone who's knows diddly squat about design, art and cinematography. It pains me they haven't released this series on HD media! 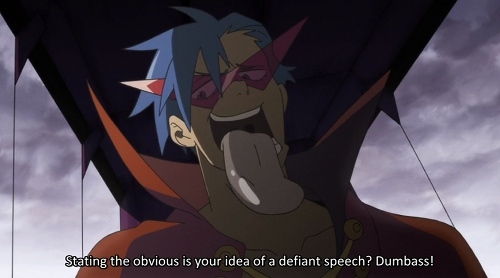 Tactics: A confident, goofy tongue wag is essential for putting enemies on notice. Also makes a snappy comeback to a less than snappy comeback, and adds an air of sophistication to your dialogue!

Explanations: Anger and despair are powerful enough emotions that a Gunmen consisting of a tiny head and little else can merge with and commander the largest Gunmen they'd ever seen. 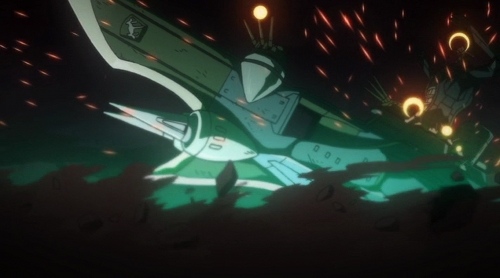 Relationships: Still feeling insecure enough about his abilities, coupled with an event he witnessed that's preoccupying his mind, Simon is incapable of performing his part of their plan. Reassuring words from his blood brother gave him the courage to do it… eventually.

Unexpected: Kamina's apparent death understandably drove Simon to the brink, before overhearing his reassuring voice on the comm. They make one last final stand in Gurren Lagann and kick some serious evil guy arse, to afford ourselves the use of relevant terminology. Needless to say, we're lead into a sense of security. 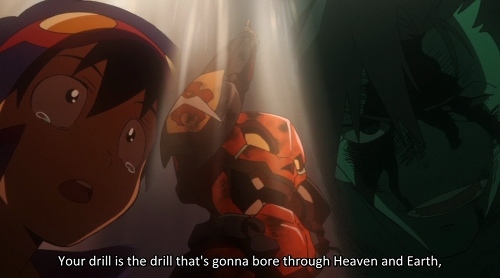 Love interest: After much innuendo in the first week of episodes, a love triangle develops and the result of said is immediately used as a primary plot device. To be honest, it felt a little tacked on and rushed as a result, meaning the impact at the end was blunted (okay, only a little). Still, their embrace was extremely sweet, even if the character I relate to didn't feel the same. 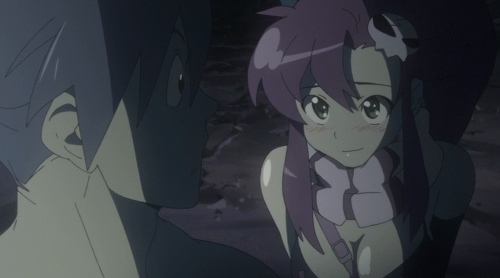 Heart tugging: The lifeblood, the fire, the passion of the Gurren Lagann team is extinguished, and a potential love is lost. When the episode finished, I had to turn the screen off and go for a walk. I've lost real loved ones (as we all have), and I've been moved this much from an… anime? Nuts to those who've criticised this series. 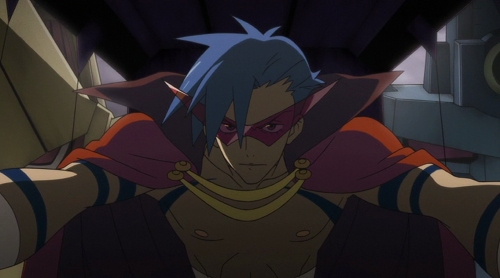 Conclusion: They have their movable fortress which only six episodes ago was the distant, menacing spawning point for all the Gunmen that terrorised our heroes in their home towns underground. Now they really are ready to take on the world, in the memory of their fallen comrade. Peace. 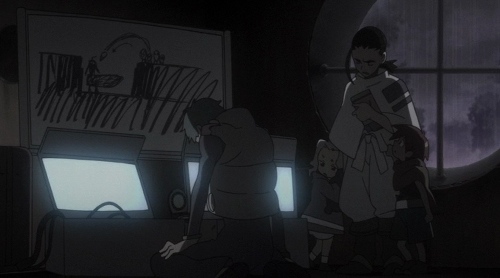 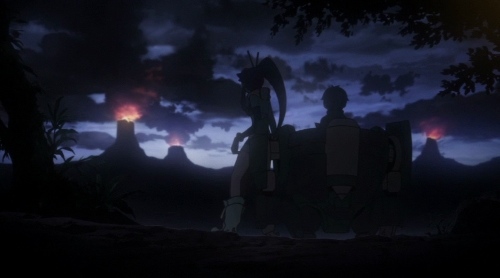