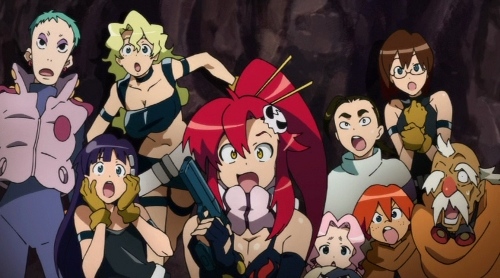 We've made it into a week of Gurren Lagann episodes, and finally they're getting some assistance! Take on the world!

Plot: Up until this point, the Gunmen they've been fighting have been more like Gunboys. I thought I was rather clever with that renaming. In any case, we learn there are far larger ones, and they spawn others rather than just merging. Ouch.

Laws: These people are the sworn enemy of evil Gunman piloting blond guy. They've stolen one of his people's Gunmen machine device things. Yet despite this hatred so deep he wants to kill them and destroy every trace of their being, he can't fight people without clothes. In episode 6 our heroes had lost them in a faux hot spring Gunmen, you see. 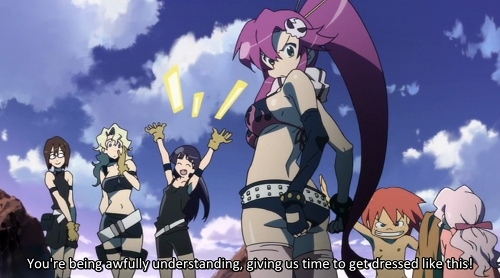 Explanations: Previously I'd mentioned learning about just how many humans were scattered around the place, though I'd wondered why nobody else was taking up arms. More on that below, but suffice to say they did exist after all!

Technology: Despite being thrown to the ground, stretched and crushed with incalculable amounts of pressure and force, Gunmen can survive provided the fighting spirit of their operators is maintained. This we had already ascertained from previous episodes, though not to this extreme. 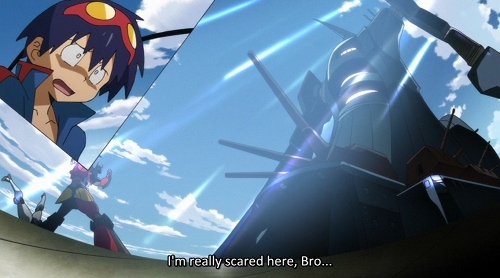 Setting: The super gigantic gathering point was itself a Gunmen, eerily reminiscent of a Japanese World War II battleship. Despite being able to manufacture these incredibly sophisticated devices that can regenerate and withstand incredible forces, their moving regional gathering point takes cues from 1940s design. Too late for the Strike Witches to fly out from somewhere and start battling too?

Strategy: Kamina's raw, surging passion (oh dear) meant he and Simon were able to take some pretty severe punishment, but it was Simon's strategising and Kamina's belief in him that ultimately won them the battle. Obviously Gainax are parodying the brain/brawn divide from countless super hero shows and series since time immemorial, but was still satisfying to see it executed so well :) 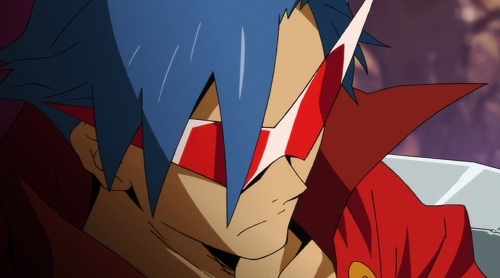 Inspiration: Sometimes, all people need is a powerful motivational force to get them off their behinds to join a cause. In this case, the legendary antics of Kamina (oh, and Simon) and Kamina and their Gurren Lagann who's reputation spreads around the world. We need some people like that here.

Design: One of the great things about shows that revolve around magic, or dreams, or alternative realities, is that designers can be really creative without restrictions on common sense or what's available to us here. I loved the yellow Gunman the best, he looks like a banana :). 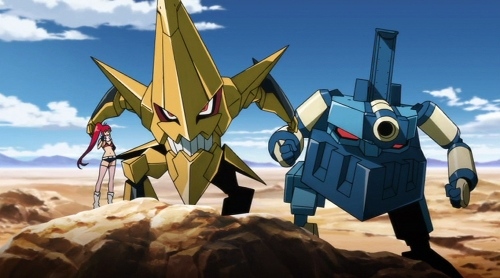 Unanswered questions: Yoko is beautiful, Kamina is terribly masculine and rugged, and Simon is… Simon. They were all seemingly picked from random by chance encounters. So why are the others in their coalition of awesome so… overly, stereotypically Ruben-Schade-esque in attractiveness? Which is to say, not very attractive at all? Were the attractiveness genes confined to a specific area of the planet, or layer of crust?

Relationships: Yoko continues to warm up to Simon, going out of her way in what looked like a terribly awkward pose to give him words of encouragement. I'll admit it, I can finally see myself liking her now :) 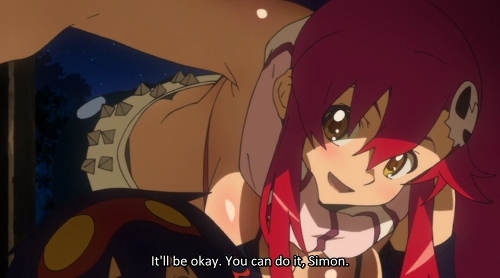 Heart tugging: Kamina describing to Yoko why he's doing this: wanting to have children living under the sky without a worry in the world. cries :')

Conclusion: A real motivational episode. Human spirit and determination. United they stand, and they'll take on the world. A most relevent episode given what's going on in the world right now. We'll be watching o/ 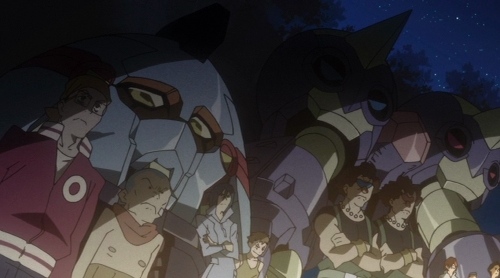