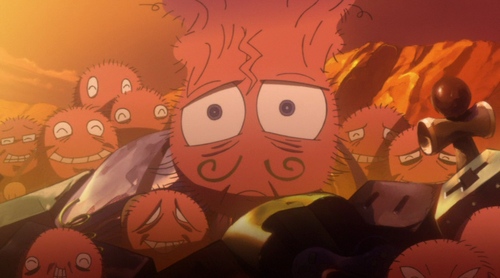 A power failure couldn't stop me from posting my Gurren Lagann episode summary yesterday, and sure as heck a university network failure won't either!

Plot: Compared to the previous episodes, the situation our heroes found themselves in (or on, given they're not underground anymore) bordered on the surreal with it's weird fuzziness; the design of the characters also seemed more exaggerated and cartoon-esque. I was informed (warned, if you will) about this by a friend, but I had to see it to believe it. Just wow.

Scenery: The first episode in the underground village, and Kamina and Simon's subsequent first view of the sky after breaking through showed some amazing art, but I think this episode topped it. The desert scenery was beautiful, if a little cliche. Dear Gainax, we want BluRay. Danke. 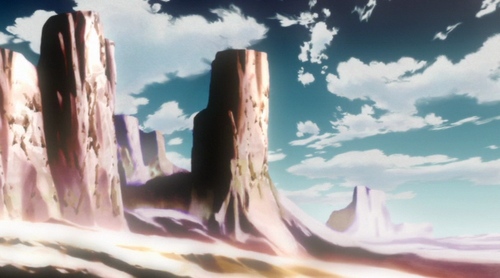 Safety: Proving a point regarding rugged manliness is worth sacrificing the safety of your brother, and baby dinner plate robots a fabulous hardware guru designed and built.

Enemies: Calling a spade a spade: they're Tribbles. As Star Trek did to lighten the mood after heavier or more involved episodes, this Gurren Lagann tale (of Alan A'Dale) was more lighthearted with a formidable enemy too fuzzy and cute to be scared by. I suppose they're the most dangerous though for that reason ;). 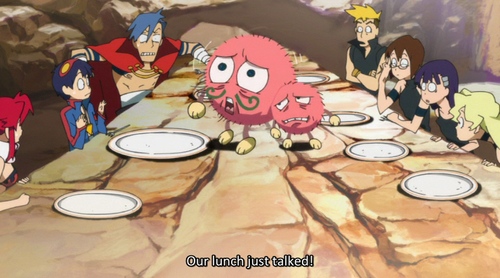 Explanations: Men are incapable of hunting for food when hungry, so naturally its up to their new (and obviously very attractive) acquaintances and Yoko to gather comestibles. Of course, their catch turned out to be sleeping sentient puffballs.

Technology: As we learned in previous episodes, these stunning Gunmen contraptions are effected by the mood and passion of their operators. We now learn more primal urges such as hunger have a direct effect as well, with their combined Gurren Lagann going as far as to point out low stomach contents on their displays. They also need increasingly lengthy, colourful and epic transformation scenes to pull off their combining. 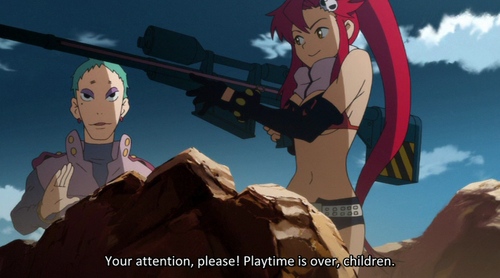 Ruggedness: Merging Gunmen in a manly way is critical, and shaggy dog like creatures with thick white fur that would catch all sorts of dirt make for far more valiant desert steeds than horses.

Mini harem: Compared to most anime (so far), Gurren Lagann has a male dominated cast, but this was temporarily reversed in this episode, with comedic effect of course. The sisters from the so-called Black Siblings took quite a shine to timid little Simon… before they see the far more attractive and charismatic Kamina of course. Oh well! 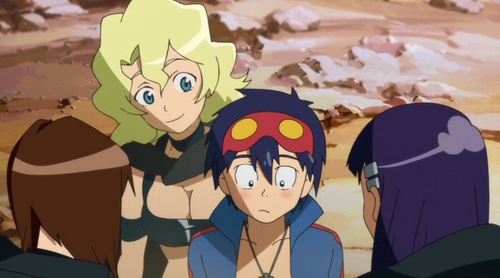 Dysfunctional yet functional family: The assertive one, the shy one, the cutesy one, and the brother who can't go hunting when he's hungry. They roam the world on shaggy dogs. Wait, I already said that.

Pets: I'll be scolded for this, but Boota reminds me of Butan from Clannad. Puhi~Puhi.

Conclusion: After some more serious episodes, this was a more light hearted romp with silly villeins that still managed to deliver some character development and plot advancement. Because their dashing steeds were the part of the episode that made me laugh the hardest, we ride into the sunset in style: 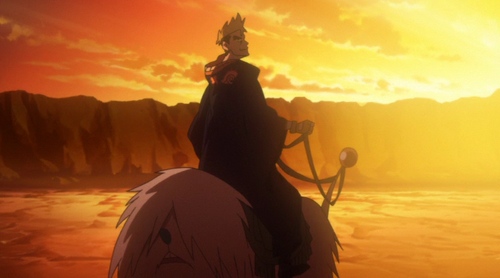