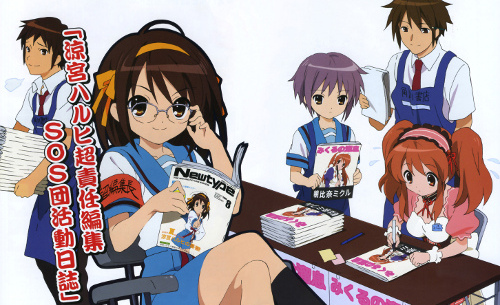 Yes yes I know it's painful post to read (ze grammar goggles, zey do nothing!!!), but they make a good point.

So some people i heard during some chat (when I was watching Hellsing) said “I love the anime show there so mad awesome like how they they made made the motion and everything.”

And this guy just came out and yell “Hells no! Manga is way better they tell you more of what happen and they released way early its better then those anime shows when you have to watch TV so you have to wait next week to see more.”

And this happen in anilinkz.com and then they stop cause some guy came in to stop there war raging terror.

People who expect a true to form, purely animated version of a manga are the same kind of people who get frustrated and disappointed when they go to see a Hollywood movie based on a book, then proudly proclaim they left stuff out and they didn't like it. No, really, they left stuff out? Your powers of deduction are incredible! It's as if it's a different medium!

Not that I have strong opinions on stuff like this, and I do concede on occasion some films (and anime) have less in common with the books and manga than perhaps they should if they're to share the same name, I've just been around enough people who seem to make it their mission to point out problems with book to film adaptations, then endlessly complain. One would thing such people would just stop seeing such films if they irritate them so.