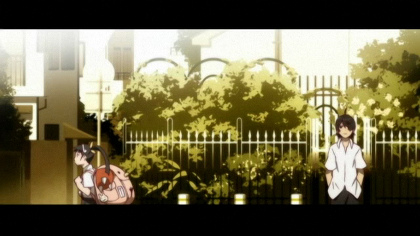 It's been almost five months since I last watched an episode of Bakemonogatari, so I figured I'd rectify this situation on this lovely Sunday afternoon.

It's not entirely my fault that I haven't blogged about this epicly awesome series for a while, it's all Shaft. Yeah, that must be it. See the thing was Bakemonogatari's final few episodes were released online instead of being broadcast on television, but there was a delay. Not only that, but I went on holidays in Europe around that time. Developed world problems, they're terrible. 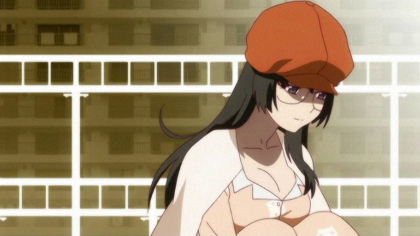 I’m writing up this anime review in nvi

Hey, if you were following my nvi related posts recently you can appreciate that! This was the third episode of the Tsubasa Cat series in which our beloved and super smart meganekko class leader comes out as being possessed by a cat oddity, hence the series being called Tsubasa Cat. Sometimes I worry if I were a journalist or reviewer I'd be too good at it, but the worry subsides when I read my own words.

Using a plot device that would be predictable if it weren't for the fact what happens between it's initiation and conclusion is completely different each time, the crux of the story is Koyomi learns of Tsubasa's cat oddity, so he has to take her to see Epic Hawaiian Shirt Guy with a collar so long it rivals Koyomi's sentient hair antenna. The fact you thought of something else when I was discussing a male character's long… collar is troubling. 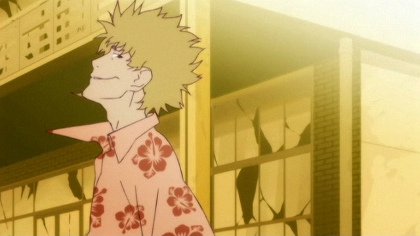 You’re not the only one

So we all know Koyomi was cast as the typical awkward, under achieving guy that otaku can relate to, other than the fact Tsubasa explained to him he suddenly got charisma and popularity with girls through coming into contact with a female vampire. You know you're in deep when you read a sentence you just wrote describing a plot so ridiculous a regular person would laugh but you find it perfectly normal.

I was going somewhere with this. As it turns out in this episode we're reminded just what a pervert he really is. Hey, he wanted to check Mayoi out, but he was only kidding!!! May he take your coat while you're wearing pajamas? Oooh oooh a buxom young woman is pressing against him while he rides his bike, oooh! Wait, that sounded even worse than I intended, I'll stop now while I'm ahead. Cat ears. 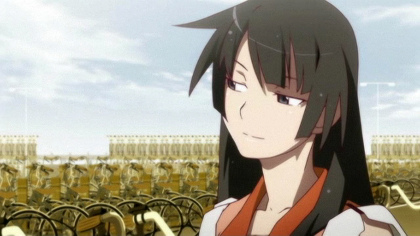 Cap’n, I cannot hold the forth wall much longer!

I'm a huge sucker for writers who break the fourth wall, so when Her Senjougharaness informs Koyomi that her voice actress is very good at her job, I was smacking the table with laughter! Speaking of that scene, that was one TIDY bicycle parking lot! And why was Hitagi even there?

I don't care if a bunch of people don't like this series, the art, the characters and the blunt jokes like this mean this will probably be in my top 10 when I finish, presuming they don't mess up the ending. It was for these reasons why I enjoyed Sayonara Zetsubou Zensei too. 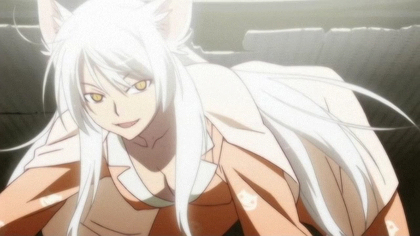 I admit it, I blog about anime because it gives me an excuse (along with this entire category) for talking about complete nonsense with lots of innuendo. Hey Koyomi, you can't park your bicycle there, you could get arrested! I'm stopping now.

By the way sorry about the quality of screenshots, I didn't have much internet quota left for this month. To make up for it, here's the best shot from the entire episode! 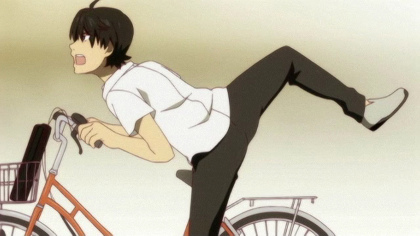