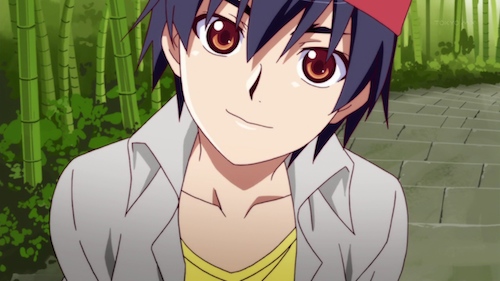 You all remember that computer game Lemmings? I'm talking about the original one that was released for the Amiga and DOS. We had the original version and I remember this one level that had dark green trees and spooky music, both of which weren't featured on any other level. In a spooky way (well, it is a Ghost Story!) this episode of Bakemonogatari kept reminding me of it.

It's a new Nadeko Snake story arc with and that means the introduction of a new character, if the previous ones are anything to go by. Quite a laid back, easy going episode until we got to the last five minutes!

I've noticed I've started slipping into old habits again with my reviews here. On my old anime blog I tended to start a review of a series by talking generally about it, but as the story progressed I started slipping into more of a spoiler discussion of just the story for each episode instead. I guess as shows progress it's hard to just keep talking about themes and art without talking about what happened. Can you forgive a computer science student who isn't doing any courses in creative writing or journalism? :)

Epic Hawaiian Shirt guy sent our superhero Koyomi on an errand at an overgrown, abandoned shrine and Suruga tags along with him and is surprisingly chummy. Turns out Her Senjougaharaness is more concerned with Koyomi messing around than Suruga and gave her firm instructions to report back if he tried anything lewd and/or sneaky. She… has… him… under… her… control! 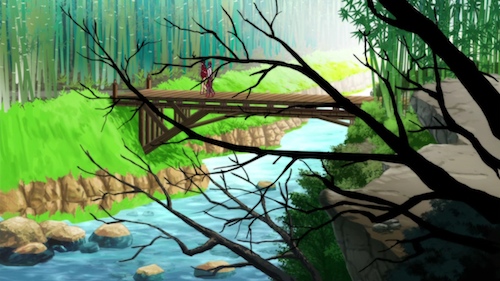 On the way up the trillions of stairs which are in surprisingly good condition and aren't overgrown even though the shrine was in compete ruins, they pass a mysterious girl who Koyomi thinks he recognises. I recognised her clothes: she has a Shihou Matsuri hat! I wrote so much about Sola on my old blog, really wish I still had all those posts. Anyway Koyomi and Suruga are scared sh*tless by a huge dead snake that's been hacked to bits and the scene is abruptly cut, as we've come to expect from this unconventional series.

Zipping forward we're back at the high school after classes and Koyomi has enlisted the help of our super cute and smart meganekko friend Tsubasa to help him pick books to study for his entrance into the same university as Hitagi. After she abruptly leaves with a headache Koyomi notices the same girl he saw before looking up books on the occult. I'll be talking more about the art in a second, but I thought this whole scene was drawn amazingly. To use technical cinematic terminology. 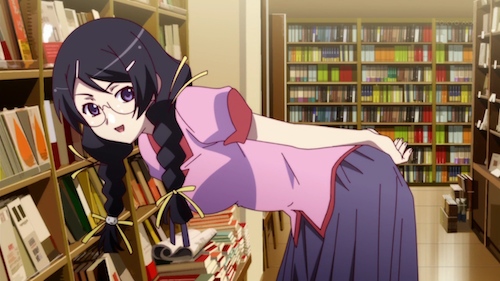 Having seen the girl he recognised from before, Koyomi arranges for Suruga to meet him at the abandoned shrine in the hopes of seeing her again. They find her attacking another snake, to use the Bakemonogatari parlance her "oddity". Her name is Sengoku Nadeko and he knew her from when he'd meet his younger sister's friends back when he was in primary school. The plot thickens.

They take her back to Koyomi's room which looks like the set for an Ikea catalogue and after Suruga tries to look for his… stash… the poor Nadeko shows them some bloomer related fanservice and scars that were inflicted upon her by her oddity, in this case the snake she can't seem to kill. She pleads for help and the credits come up, talk about a damn cliffhanger! 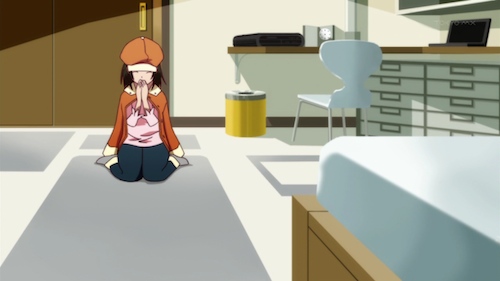 I reckon the art in this episode was some of the best since episode 01, possibly the best so far. The whole scene at the abandoned shrine was stunning. The bookshop was also beautifully detailed and had so much more depth than what you'd typically expect even from a higher end production. If there's ever a BR version of this series I'll be buying it and a PS3 Slim just to take screen captures for desktop backgrounds, they really are that good!

I'm also left with a sense of jealousy over Koyomi's room. Neither my room in Singapore or Adelaide is as swish, and I can certainly say I don't have a giant banana… I think I might end that sentence right there. 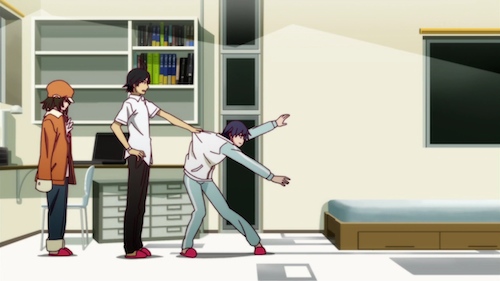