As we learned in episode 07 the mysterious gym short wearing Suruga who Koyomi bumped into had a possessed arm, but it turns out the problem is far more pervasive than we were led to believe. Despite her assurances that her arm's actions are entirely involuntary on her part, Epic Hawaiian Shirt Guy explains that the opposite is in fact true; the arm carries out exactly what she wants. She perceived Koyomi to be a threat to her relationship with Hitagi, so she had to deal with him. Same with all the people that stood in her way in primary school athletic events and everything in between. 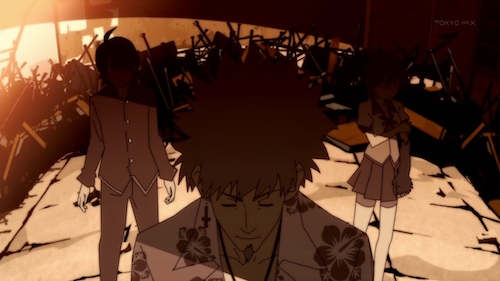 After a long history of her family past and after being amply warned, what ensues is a battle of epic proportions as Koyomi tries to overpower her and force a situation where her evil thoughts could no longer exist. While they're fighting Meme calls Her Senjougaharaess from Koyomi's phone and she enters as a human shield. Long story short, and after a heartfelt confession on the floor Hitagi explains how she can't reciprocate the feelings Sugura has for her… and that if she were to kill Koyomi, she would kill her. I believe that led to a forced situation where Sugura overcame her problems and the three became friends again… maybe? I think? In any event, talk about a dangerous love triangle. Sorry, it had to be said.

One thing that did strike me though was Hitagi's reference to Koyomi where she said they were "going out", which provoked no stereotypical knee jerk reaction or even a blush. Perhaps he had too many broken bones to protest, or he was too wiped out. Despite improving his vampire powers, he was still involuntarily flung into a heck of a lot of tables. What's the collective noun for a sh*tload of tables? 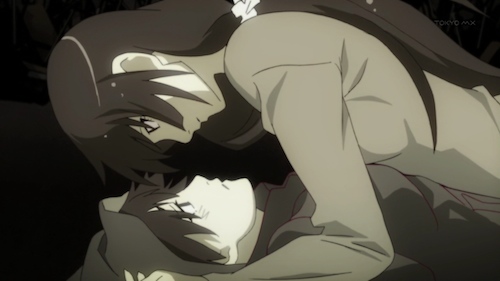 It just shows how the setting and plot of series just keeps getting weirder and more unconventional, and how the story arcs act almost as much as independent stories as two separate series' would. Saying Suruga Monkey was different to the Mayoi Snail would be like having a mummified hand. Don't quite understand why I made that comparison. The opening credits also continue to be downright spooky in their weird abstractness, to lend myself the use of sophisticated movie terms.

Little tip, if you get around to watching this, don't do it late at night unless you've watched enough Elfen Lied that you've become completely desensitised to such stuff!