It's been a week or so since I last watched an episode of Bakemonogatari, and after what's gone on this week I really feel like I deserved another!

We're up to Suruga Monkey, Part Two of which episode 06 was Part One. Much of this episode mirrored episode 01 to the extent that Koyomi meets a possessed girl who he says a bunch of stuff to, she replies with a bunch of stuff, and they end up at Epic Hawaiian Guy's construction site once more to perform an exorcism. Only this time it's Suruga not The Senjougaharaness. Suruga's name would fit into a Michael Franks song really well.

Before any of this happens though we meet up with Koyomi again as he lays on the railway tracks with the crap beaten out of him. He categorically denies any altercation took place, preferring to pretend he just ran into a wall on his bike which coincidently is still spinning wedged up on a railway catenary. Hitagi doesn't seem to buy the story, but to make him "feel better" she stands over him so whenever a train rushes past around them her skirt billows out and gives him a peek. How… interesting.

Unconventional weirdness we've come to expect from Senjougaharaness, but I guess to be fair its healthier than morphine! Personally I would have jumped off the tracks for fear of getting hit by a train or I would have asked for a hug and an ambulance. I guess I have survival instincts that are stronger than… other instincts. Gosh darn I'm innocent. 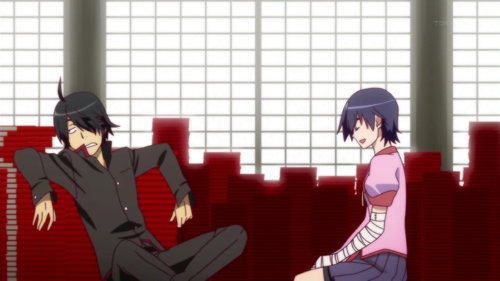 Given the assailant who perpetrated the wailing-upon that night had an unmistakable arm, and given Suruga had a bandaged right arm Koyomi put two and two together and paid her a visit. After cleaning up hundreds of books on a certain lifestyle, they have a discussion related to the incident where she admits a part of her hurt him. The phrasing is important; turns out she was cursed with a monkey arm which tends to have a mind of it's own. Can you imagine the precedent? Your honour, my client did not staple that person's mouth, only her left hand did.

She also admits something else which does explain why she and Hitagi had such a catastrophic falling out. Koyomi's expression when he finds out is priceless! She also holds back none of her jealously. I guess you can figure it out. 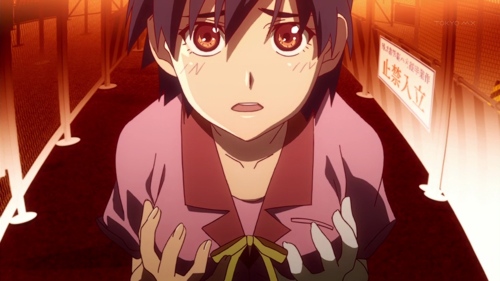 I assume she's having breathing problems.

Given Koyomi seems to have a knack for helping people with possession problems, he opted to take Suruga to see Epic Hawaiian Shirt Guy. During the walk she tries to "talk dirty" (her words) to Koyomi, right up to discussing why she wears bike shorts under her skirt. He dismisses all her advances, even when she comes out of nowhere and suggests she could be a good substitute for Hitagi. His response was epic: nobody can "replace anyone" because we're all individuals. Damn straight! Though does it still apply in a world of spirits and whatnot? 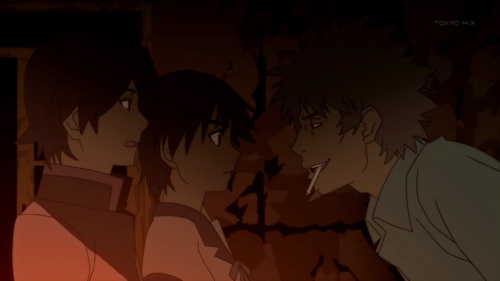 When they finally arrive they confront Shinobu to have her arm exorcised which turns out to be something quite different entirely. He can help her, but we don't see anything after that. Well we see the credits if that counts, but last time I checked credits aren't sentient beings and can't count. Well okay computers can count, but they're not sentient. Credits aren't computers. Yet.

We don't actually see anything after this which of course leaves questions unanswered, but this is a part two out of three. I've got to say the pacing of this story arc is much better than the Mayoi Snail trilogy (part one, part two, part three) and the backgrounds are still amazing. The initial scene around the train tracks late at night had some brilliant lighting effects, really something else. I've been impressed with the style of graphics in Shaft productions, but this really is in a league of its own.