After the relatively slow pace and harmlessness of the Mayoi Snail story arc of Bakemonogatari, this first episode of the Suruga Monkey arc seemed to return to the more surreal, darker theme of the earlier episodes that I'd expected the entire series to be. Perhaps it's an alternating thing; heck as long as they don't pull an Endless Eight I'll be happy.

The graphics have also returned to their brilliance. I really mean it, the art is amazing. We also had Koyomi's descending the impossibly huge staircase again, we have Hitagi pointing sharp stationary at him, it's as if the last three episodes didn't happen! 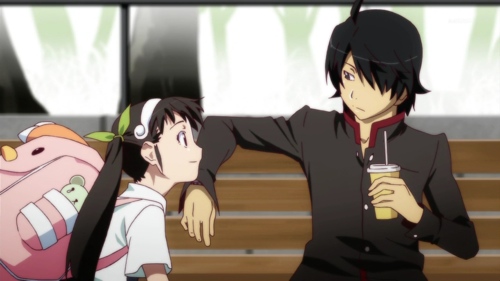 Well in fact the last three episodes did happen because in the very first scene Koyomi is walking and talking with Mayoi again, this time while he's on his way to study with Hitagi for his exams which (surprise surprise!) he's not confident about. Of course Mayoi implies a study date with a guy and girl is never that innocent which results in some hasty fighting and resumption of walking within seconds as we've come to expect from their relationship. No biting though this time. Do spirits need to visit dentists?

Of course it turns out a girl we're introduced to in this story arc going by the name of Kanbaru has been tailing them the entire time, and after some mad sprinting that apparently whipped the air in the same way as a turbojet if we were to believe the sounds, she catches up and attempts to strike up a conversation. Turns out she knew Hitagi from middle school, a time of schooling I'm assuming as someone who went to an Aussie school in Singapore which doesn't have it occurs between primary and secondary school. Yes that was a joke by the way ;). 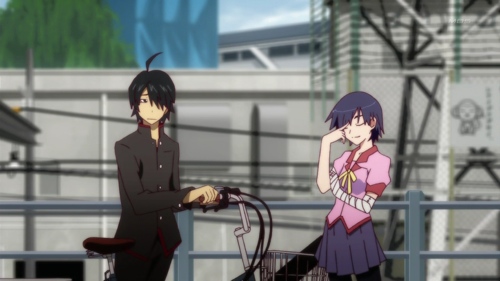 Suffice to say their study date (I'm sorry Koyomi, your study "session") starts out pretty well; Hitagi confesses her love for him a few more times and makes suggestions about living together when they both finish school and start university, assuming Koyomi knows what he wants to do and get good enough grades. Where were the super smart girls who take interest in introverts when I was in school I ask you now!?

Well let's just say the metaphorical crap hits the fan as soon as Koyomi mentions that he met Kanbaru on his way over to study with her. She comes out with stationary blazing and nearly pokes his damn eye out; only a frantic pledge of dedication to only her subdues her. Fortunately they leave on good terms and she asks him to deliver rental payment for her which he obliges, how sweet ^^. 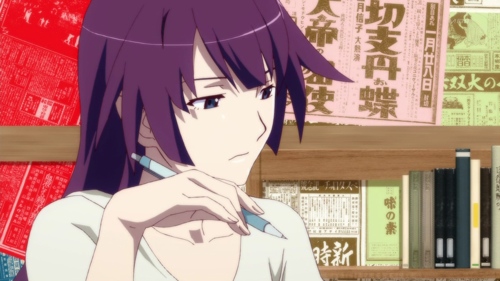 As the sky gets dark The Class President to End All Class Presidents explains to Koyomi over the phone why Hitagi snapped the way she did which was darn decent of her I thought. Turns out they were great friends at one point, but Kanbaru had started developing feelings for Hitagi which just like a steam turbine weren't reciprocated which caused tensions to say the least. Another joke thrown in there, shaddup.

What came next though for Koyomi was insane. If the eye poking incident hadn't set my teeth on edge, this scene did. I know these reviews have basically turned into giant spoilers as they stand, but this really did take me by surprise and I won't be putting it here. Suffice to say, Hitagi manages to help out given she was trying to catch up with him and managed to see it happen and I'm assuming his special ability fixed everything after the scene ended but damn, talk about left field! 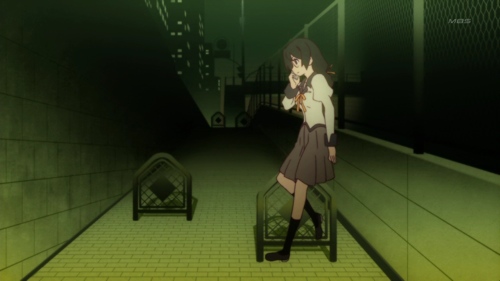 Bakemonogatari is back people. The previous three episodes were kind of sweet which I'm all for in regular doses, but this episode was all back to what the show was originally.