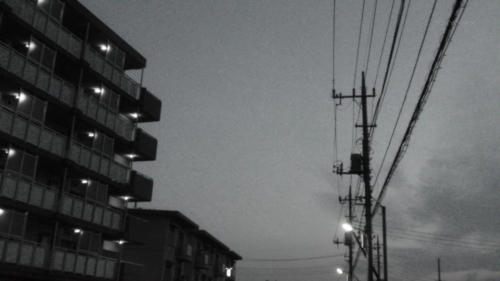 Sitting down and reviewing an anime episode I've timed takes the same amount of time as three to four regular posts here, even if they're something obscure like a fun fact nobody cares about. Busy, but back to business. That sentence had some fancy alliteration.

Because the Hitagi Crab story arc only went for two episodes, I had wrongly assumed the Mayori Snail arc of Bakemonogatari would only last two as well, but here we are for a third serving in that gigantically surreal playground with that raised coloured track everywhere. Dang urban renewal! 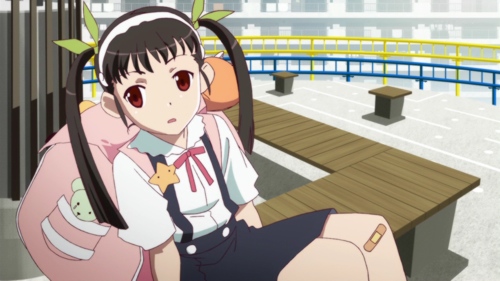 After the fruitless search efforts in the previous episode desite Hitagi's awesome GPS phone, this one focused on Mayoi's troubled family life and how she ended up looking for her mum on Mothers Day (surprising though it may seem) in the first place. Or in this case the first "house". That sounded wittier in my head.

As someone who lost their own mum to a debilitating illness I can understand how difficult it can be growing up without a mum, but I imagine it must be even harder for someone who knows their mum is alive but due to a divorce and legal proceedings they can't see them. These characters and I have such happy home lives! 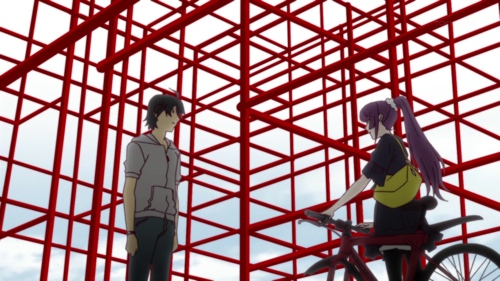 So after some spendgags about groping someone far younger than himself by accident and the subsequent bites which quickly healed given his past affliction (lots of thinks they expect you to assume and accept!) Hitagi returns and starts profusely apologising for pretending that she could see Mayoi. It's a coping mechanism because she wanted to appear normal.

We find out why she couldn't see her this episode, along with some funny takes of Koyomi arguing and fighting with himself from Hitagi's point of view. Even J.J. Abrams made a directing appearance: 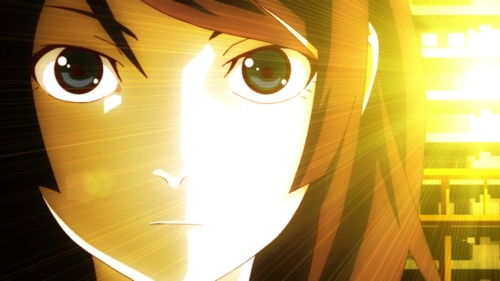 Now due to Koyomi's desire to help people out of the blue Hitagi tells him in English that she loves him. My first reaction wasn't "awwww", but "what?" After only a few episodes, three of which were in the same day she drops a bombshell like that! Of course as she follows the tsundere personality to a fault, Koyomi is the typical guy who doesn't reciprocate but merely feins surprise and dodges answering directly.

And yes, it turns out they do find Mayoi's mum's house, or at least where it used to be (dang urban renewal) and her "state" is subsequently promoted. I had no idea spirits followed strict ranks and orders, and that by merging with a vacant lot that formerly held a place of residency it could generate an intense glow that apparently nobody else in the neighbourhood saw! 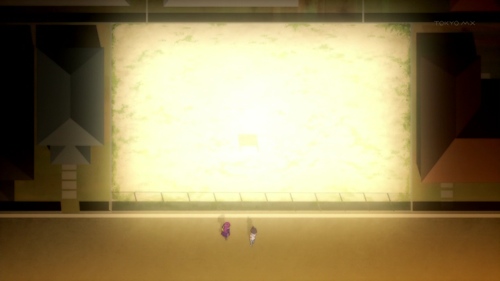 I gotta say, for a series that was so interesting and weird to start off with, having three episodes set in the same scenery with the same graphics was a bit tiring. I'm still liking the story, but here's hoping other things that get "promoted" are the scenes.

And of course an episode of Bakemonogatari wouldn't be complete with some just a bit of blatant fanservice, this time a bizarre angle of Hitagi just before she confessed her feelings. Allegedly you need buns of steel to confront Koyomi's spirit seeing ways! 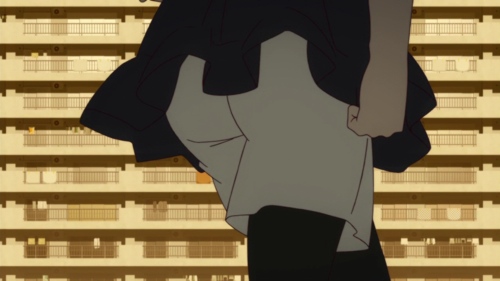