After going through the two part Crab God saga of Bakemonogatari, this episode was far more "subdued" and whatnot — it also didn’t stray from the one park/playground scene for the entire duration of the show. I haven’t read other people’s reviews yet, but I’m sure there were probably more than a few who bashed it for it’s… sleepyness.

Subdued, sleepyness, whatnot, these are technical visual arts terms. I know what I'm talking about. 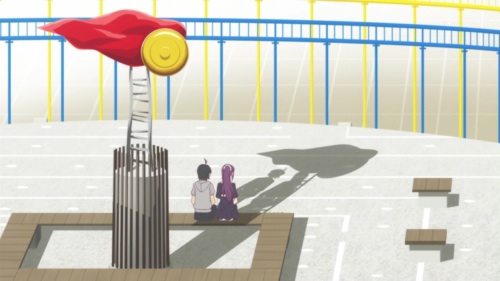 I liked this episode; then again I really liked the episode where Kyon has to go get the room heater for some reason too, so maybe I'm just strange. Perhaps there's a part of me that's just pleased when people don't automatically think they have to cram as much as they can into their allotted timeslot.

Yes, this entire episode took place in an abandoned playground/park thing which is abandoned because it's a specific day of the year with much backstory behind it. Koyomi made his way to said park himself but by sheer brilliant dumbfounded luck Hitagi just happened to walk past too. Genius! Or maybe she's a stalker. Hadn't thought of that. 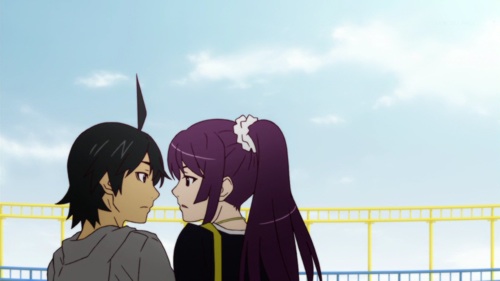 Inevitably much of the dialogue surrounded what Hitagi thinks she owes Koyomi for helping her fight the Crab God and the curse she had been cursed with. Cursed with a curse, I like that. There's a sweet moment (aww ^_^) and at one point she suggests such things as only wearing an apron to fix him breakfast, but instead he ends up preferring to talk about his family problems. Aww. 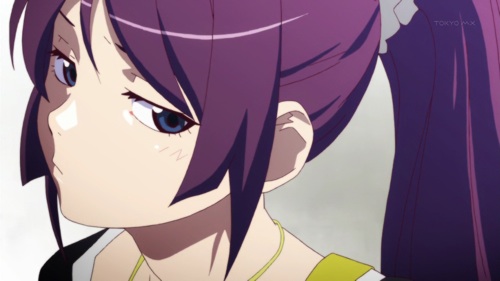 Speaking of eyes (wait, what?), I think it would have made far more sense for the "password" for this episode to be eyes or hitagi-eyes. It was almost as if they adapted the story for this episode to maximise the number of random close up shots the animators could do so they could draw Hitagi's eyes. I lost count after 14 times. As far as fanservice goes though, for me eyes are okay ^_^.

Almost as an afterthought we're also introduced to Mayoi who was lost, I think. Suffice to say if most people Koyomi's age did to Mayoi what he did, he'd be in a LOT of trouble! But did you see her eyes? There's something going on there… 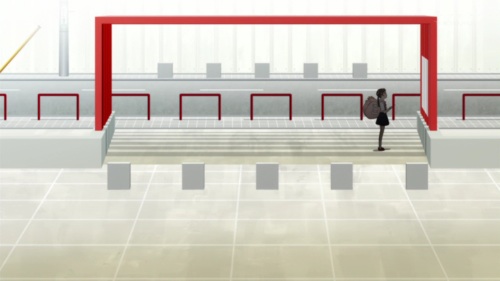 As with the other episodes the setup appeared relatively normal but was ever so slightly surreal, it’s another thing I just can’t put my finger on but you’d understand if you watched it. I don’t know what kind of playground they were at but it was huge. Not as huge as the washing machine was shiny and red in the second episode but big nonetheless.

Wait, that didn't make any sense. I feel the urge to ride a girder bicycle, or whatever that thing was.