In my review of the first episode of this epic series Bakemonogatari (I can spell it without looking for it somewhere else now!) I made the comment that the first few seconds of fanservice threatened to put me off the show.

Actually leave that thought aside for a second, while we're talking about beginnings the intro credits to Bakemonogatari with the black and white photos, weird flying staplers and a King Kong Hitagi are just awesome! It's surreal and weird, just as I would have expected. 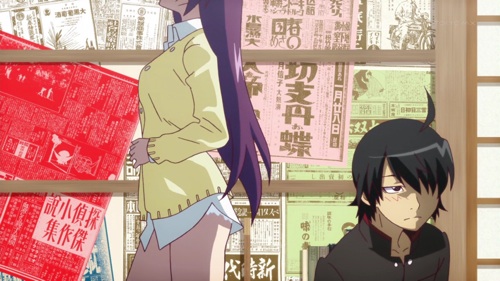 Well here we are in part two of the Crab God story. After Meme (the psychedelic aloha shirt guy!) instructs Hitagi to go and get changed at home then come back for her exorcism (as it were), we're shown her showering with very conveniently placed steam, followed by an extended scene with her walking around in her stationary-patterned underwear (you read that right) trying to pick clothes while she belittles Koyomi for getting overly embarrassed, and for being a virgin. I think that was it. Aiyo, only in Japan!

Look, I'm okay with a little of fanservice (surprise surprise I'm a bloke, shaddup!) but I just can't take a series seriously when it's used as a primary plot device for extended periods of time, such as when it takes up half the episode! I'm really loving everything else about Bakemonogatari, I hope they don't ruin it's promise by pulling these kinds of shenanigans for too long. 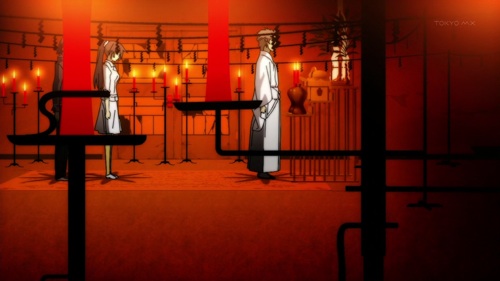 Back to the abandoned school and Aloha Shirt Guy has set up an alter (here I was expecting a figure manufacturer, okay okay bad joke) where Hitagi finally confronts the God that has been poisoning her existence. I thought the representation of said spirit was brilliant; they escaped the tired cliché of Gods being old and being surrounded by clouds. What can I say, the graphics are brilliant.

We're also introduced to her troubled family past and her mum's associations with a cult who's members tried to assault her and the resulting family breakup. Tough stuff. 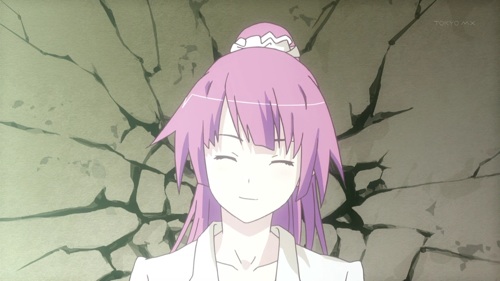 After belittling Koyomi for almost two episodes, like the self confessed tsundere she is she thanked him for helping her at the end of the ordeal and asked if they could be friends with a wink and a smile.

Though to be a true tsundere wouldn't she have had to treat Koyomi with scorn and contempt for at least half the series first?

Anyway, being friends? I still submit to you dear readers that if a young women tried to staple my mouth I'd stay the hell away from her even if I were a fast healing former vampire and she had… stationary themed underwear? Aiyo. I need a cup of coffee from Sudoh-bucks. 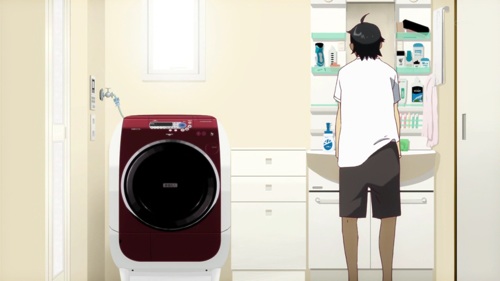 Oh yeah, and Koyomi's family has a fancy washing machine. Look at it, it's bright red and shiny! You couldn't call this a "white good" could you? I tell you what, if Alter or any other house makes an Araragi family washing machine figure I'll buy it! Come on, are you saying you wouldn't? On second thought, don't answer that.

Shaft can still make an epic series! After Nurie reminded me in the comments of the previous post I have the DVDs of Sayonara Zetsubou Sensei and the Goku OVA but have never watched them. The graphics look awesome in that too. The problem is these things called studying and working keep getting in the way ;).