This is the first anime review I've posted here on rubenerd.com/anime/ since losing my last anime site which was separate from this. Here we go!

It's often said first impressions are important. I like to think I'm the type of person who doesn't judge people or things instantly, but I guess I can't always tell my subconscious to follow these rules. I belabour this nonsense (a lot even for someone like myself) because when I started watching the first episode of Bakemonogatari and was treated to several long seconds of mindless skirt flailing pantsu complete with a timer to show us how much time of ours they'd wasted, I was ready to call it quits. If you've watched it, you know what I mean.

I'm glad I stuck around though, no descriptions people provided online prepared me for the awesome graphics and art of this show. My jaw hit the floor, the backdrops and the art are absolutely stunning, like nothing I've ever seen before! This may have the unintended consequence of putting me off watching any other anime series ever produced before because anything compared to this is just… crap! If they ever release this series on BluRay I'd be able to take enough stills from it to have a desktop backgrounds for years! 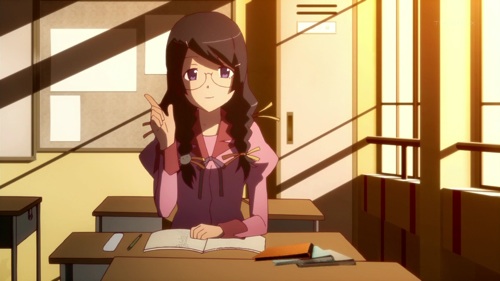 The camera angles, cuts and use of first person cameras especially when Koyomi was talking to the class president of all class presidents Tsubasa were brilliant. What can I say, I am a bit of a sucker for meganekko ^_^. The pacing and delivery of the dialog is also very well done. 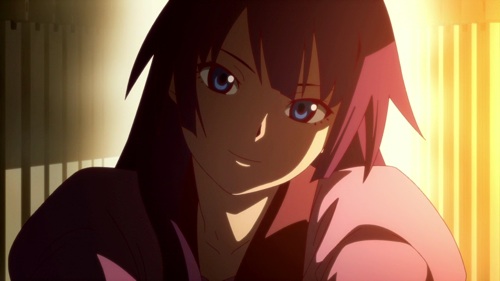 In a previous post I said Senjougahara Hitagi was purple and she had a thing for stationary. In the screenshot above you could be forgiven for thinking she's sweet. You'd be misreading her entirely, she is absolutely bat crazy insane. I'm telling you right now even if I was a former vampire like Koyomi and someone put a stapler in my mouth I would run the heck away get me a taser!

Do tasers work on fully grown people who weigh virtually nothing? Anyway given how the story progressed it was a good think Koyomi was himself and not me, for Hitagi's sake. Well I guess that goes without saying. 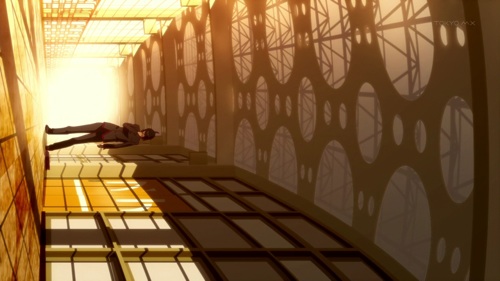 I'm jealous of their campus as well. Mine has a few new buildings along with a cool new audotorium and library, but it has nothing on this place. It looks more like a gigantic ocean liner. And what's with that stairwell? I guess I can take some solace in the fact that I'm not living in a construction site! 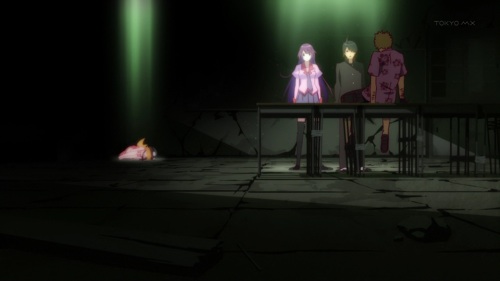 In conclusion, yes I'll be watching the rest of these. Even if the plot fails catastrophically I'll be watching just for the graphics, and seeing whether the Crab God's curse will be lifted. The first episode is a two parter, very clever.