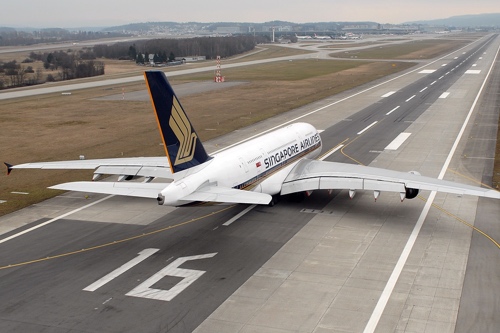 Airbus has announced they’re ceasing development of the world’s largest passenger jet after 2021, citing a cancelled order from Emirates, the type’s largest operator.

For family reasons that weren’t wonderful, we flew on the first commercial A380 from Singapore to Australia in its first year. I loved the huge staircase at the front, and how quiet the upper deck was. It seemed impossibly big. The 747 is objectively more beautiful at every angle, even the An-225 looks sleeker, but I’d admire the scale and engineering each time I flew on one of these behemoths.

The elephant in the room, visually is the A380. But the metaphorical one is the 787, and the A350 that was built in response. These ultra-efficient, composite planes have opened up new direct routes, and reduced the need for hub-and-spoke models for which the A380 is best suited.

But it’s not all good news. Airports around the world are reaching capacity thanks to smaller planes. There are many variables at play here, but even with added wake turbulence an A380 could carry far more people than a few smaller planes in the same landing slot. Australia and the US are increasingly flying small, narrowbody jets in an attempt to offer more times, but the overhead cost to airports and air traffic control is huge.

Speaking of the An-225, I’m surprised there wasn’t a cargo version of the A380; perhaps that could have saved them.

Photo of the Singapore Airlines A380 leaving Zurich by Rolf Wallner in 2011.