Rafe Needleman over at CNET penned a provocative article claiming that nobody wants the latest generation of tablet computers.

Rumors have it Apple is a month away from announcing a tablet computer. Another tablet, the Crunchpad, is also due for imminent release. These and other fine keyboardless computers get great play on gadget blogs (including our own Crave), but in the real world, I believe this whole category is a nonstarter. Why we keep waiting for the killer tablet computer is beyond me. Few people really want one, especially at the prices that they will have to sell for.

Perhaps the claimed future demand for these devices is a bit on the optimistic side especially in this economic climate, but I am absolutely confident there is a market for these devices. I'll cite two examples (and a third silly one just for fun!) as well as a potential reason for why there are so many doomsday predictions surrounding these unreleased devices in the first place.

My dad has a demanding job as an industrial chemist, and much of what he needs to do is demonstrate how systems could work to synthesise materials to clients. He has a device that takes what he's drawing on its notepad and digitises it which works great in theory, but the accompanying software is dreadful and he'd love to be able to share diagrams with people in the same room as he's drawing them. It also means he has to carry his work laptop everywhere as well as the writing pad which adds weight and bother.

The second example is… me! Whenever I go to lectures I take my MacBook Pro with me so I can follow along with the slides being presented and overlay my own notes on them as the lecturer explains concepts. I've found more of what I'm doing is underlining and connecting ideas rather than typing large volumes of text.

And finally the third example is me (again!) and people like Steve Gibson. We both love doing work in coffee shops for extended hours but we hate flimsy laptop keyboards. If we had a lightweight tablet screen we could easily plug a good external keyboard into, we'd would be so ecstatically happy we could disrupt the space time continuum. I put this example last because I know people like us are a tiny minority, but we're a vocal one! 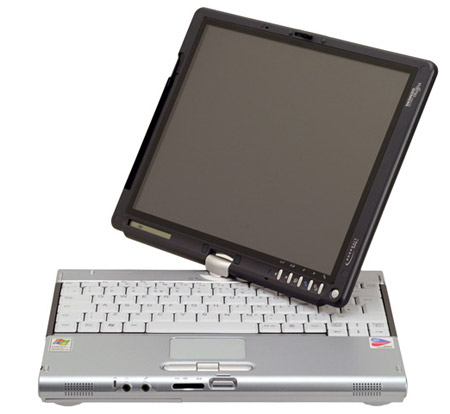 The problem is too many people associate tablet computers with Tablet PCs, those horrible Windows XP touchscreen laptops that failed to gain traction because of their subpar software, flimsy design, horrible battery life and unnecessary hardware bulk. My dad had such a device in 2008 but rapidly lost patience with it. I can compltely understand why people would be hesitant — scared even — of tablet computes if such devices constitute their only basis for comparison. I'd be scared and hesitant too!

I think both my dad and I represent potentially large numbers of users in these examples. Given it's cost and singular purpose I can't justify buying an eBook reader such as a Kindle, but if I could buy a CrunchPad or an iTablet that was lightweight, had WiFi and decent battery life it would be (to pardon the French) bloody brilliant!

Many of us already use our smartphones in situations where we would have used our laptops even just a few years ago; I reckon a next generation tablet computer is the next logical step.